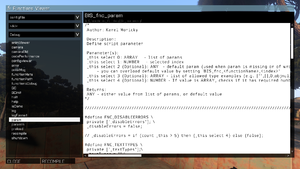 In a mission, you can leave also the folder path undefined and let functions be loaded from the default directory.

preInit and postInit attributes are truly powerful ones, as they let you execute your function at the beginning of every mission. Use them with caution!

Your function must be robust. It shouldn't allow passing arguments of incorrect Data Types in. When some values are incorrect, it should throw an error explaining what went wrong and how to fix it. And above all, its header must provide complete explanation of usage.

⚠
What is not documented, does not exist!

Notice that we're returning false at the end of exitWith code.

⚠
Error states must always return value of the same type as when everything is fine (Boolean in this case).

Once compiled, functions remain unchanged and editing their file won't have any effect in the game. To adjust functions on the fly, you can manually trigger their recompilation.

"Recompile" button in the functions viewer will enabled only when recompiling is allowed.

⚠
Do not modify these values!