1.54
⚠
This system is currently being integrated into the game engine as part of the Arma 3 Tasks Overhaul updates.

The Task Enhancements system is scheduled to be replaced by Arma 3 Tasks Overhaul in Arma 3 1.58.

In addition to the task framework optimizations and improvements that were done through 1.42-1.48 releases there are 4 new extra task related plugins being developed under the Task Enhancements label:

The Core plugin, as name suggests, is a prerequisite of all task enhancement plugins. But there are more logical links between the plugins: 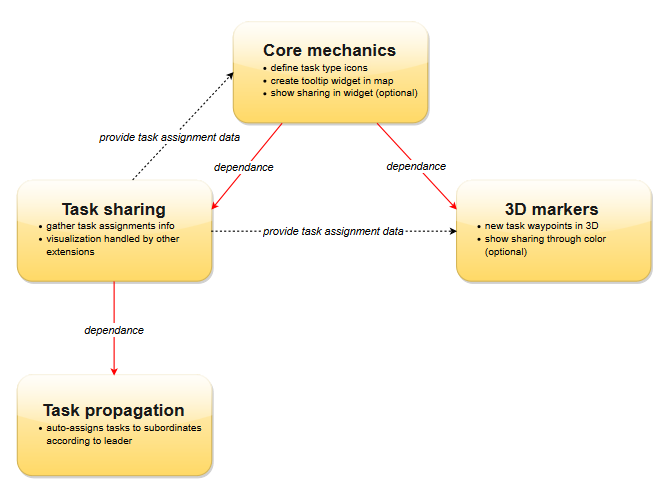 The current version is more or less scripted prototype. It is still in active development. There are some limitations due to being scripted system, but overall it works well and is optimized network wise.

The target state of Task Enhancements system is to move most of it into the engine. The frontend definition should stay intact as much as possible, but we cannot assure there won't be any changes. Moving a scripted system into the engine is just a very cardinal operation.

Be aware of it and use the Task Enhancements system at your own risk.

The functionality and purpose of Core plugin can be divided into 2 parts.

First, the plugin creates the shell for all task enhancement plugins to work and visualize properly by tweaking the task related scripts and extending the data structures to accommodate for additional task attributes.

Second, the Core plugin handles the improved visualization of tasks in 2D - in map, briefing and respawn dialog. This is considered to be a minimal version of tasks enhancements to be used. That’s why it is baked into the functionality of Core plugin.

If you toggle on the Core plugin, the 2D task markers will be replaced by new task markers with the task type icons. If the task doesn’t have the type associated (see parameters of BIS_fnc_taskCreate), the default task type and icon will used. In addition the task tooltip widget will now appear if you mouse over the task marker. The tooltip widget displays up to 3 information about the given task and can be used to quickly assign or unassign the player to resp. from the task.

The new 2D task marker created by the Core plugin consists of black square background and task type icon colored white, which is displayed over it. This is a default visual state. The state changes according to task and interaction states.

Check the table below for preview of different visual states.

There are several new task attributes, but the most visual and significant attribute is the task type. The task type defines the nature or let’s say category of the task. It is visualized through Core and 3D Markers plugins in 2D resp. 3D environment and it should give player very quick overview what is the particular task most likely about.

How are the task types defined?

The task type attribute is defined in CfgTaskTypes (see example below) as a class that currently has these 2 attributes:

What task types are available?

There are currently these 8 archetype task types defined:

And there is a pre-defined task type for every capital letter in latin alphabet.

How to create the new task type textures?

There are currently 2 textures needed to define a task type. This is due to limitation of the scripted solution. When the feature will be moved into the engine, only single texture will most likely be needed.

The 3D Markers plugin extends functionality of the Core plugin by bringing the new task markers with task type icons into 3D environment. The 3D Markers if active replace the classic task waypoints with markers consisting of task type texture and distance indicator.

The goal of 3D Markers is to provide player with more useful, functional and visually appealing info about the tasks around him.

The current visualization is subject to change and some extra control mechanics can be put on top of it. Currently the system shows all tasks in set radius, define by config parameter 3dDrawDist=10000; (default 10km). Depending on the circumstances, this can feel like too much of the screen clutter. To counter that the draw distance can be lowered or even set to 0.

The goal of Task sharing is to handle gathering and distribution of information about task assignments - who is assigned to what task.

This information is visualized in 2 ways:

The global settings takes the precedence. If the description.ext param share=0;, the task sharing will be completely disabled. If share=1; sharing will be unlocked and the local - per task - setting kicks in.

By default all tasks are allowed for sharing, so all what is needed is to set the global config property.

The goal of Task Propagation plugin is to support the squad based team play by allowing only the squad leader to assign tasks.

The system doesn’t create any network traffic, all is done locally. If Task Sharing is used, the system re-uses the data provided by the Task Sharing plugin.