Difference between revisions of "Category:Iron Front" 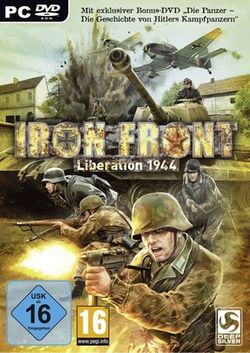 Iron Front is an Arma 2 engine based standalone game made by Awar and published by Deep Silver on May, 25 2012. The story line is set in the World War 2 in 1944 during the German Occupation of the Eastern Front also known as Ostfront, the area of operations in the game is in East-Poland and West-Ukraine.

Iron Front: Liberation 1944 is set in Southern Poland during the Soviet Offensive in the summer of that year, when the infantry and tank as well as aircraft units of the Red Army and the Wehrmacht engaged in fierce combat. It was the first time in history that the "Königstiger" tanks fought with the powerful JS2 soviet tanks.

The German's objective is clear – consolidate and regroup the remaining troops, stop the Red Army’s advance at all cost, or at least slow it down. As a Red Army soldier, the task less complex, but no less challenging: Break the resistance to enable an attack on Germany. Starting out as a simple soldier on either side, you will experience nerve-wracking, tactical combat – always caught between your orders from your senior, and reality on the battlefield. In the course of the story, both protagonists will be promoted to command tanks and even fighter planes in addition to their own troops. However, the player does not have to do all this on foot: Using their computers, tacticians will control tanks, including the famous German battle tank Panzerkampfwagen VI or "Königstiger" and the Russian Stalin tank JS2, or fighter planes such as the Focke Wulf 190 and dive bombers like the Stuka or the Petlyakov PE-2.

Online is where the battle really heats up in "Iron Front – Liberation 1944": Players can either complete missions cooperatively or compete with each other in special multiplayer modes such as "Capture the Flag" or "Attack and Defense". "Iron Front – Liberation 1944" also includes an extensive mission editor, enabling players to intuitively create their own missions and share them with their friends online, thus guaranteeing that there will never be a shortage of new missions.

This category has only the following subcategory.

This category contains only the following page.