Template:Infobox AFV The M2A2 Bradley AFV was first fielded by the United States Army in 1981. It is armed with a Bushmaster 25mm auto-cannon and TOW Anti Tank Guided Missiles. The vehicle first appeared in a patch for OFP and could only shoot HE ammo from the cannon. Mod and Addonmakers made impressive versions for OFP. The Bradley did not appear in BIS games again until Arma 2: Operation Arrowhead. 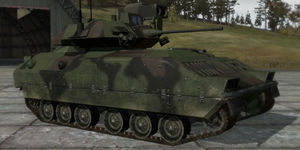