The Mi-24 (NATO code Hind) Helicopter was introduced in 1977 in the Soviet Red Army. It was an export 'hit', and was purchased by many Warsaw Pact satellite states and countries abroad. In Armed Assault, there was not a Mi-24 so that the community converted the best Mi-24 for OFP from Red Hammer Studios to ArmA. 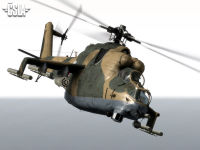