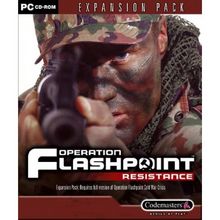 The player takes on the role of Victor Troska, a local hero of sorts. He was born on Nogova but was exiled in his youth, and after serving with various foreign Special Forces organisations he returned to the island and played a pivotal role in overthrowing the pro-Soviet regime in 1974. Having progressed through the police force and become a judge, Troska settled down to what he hoped would be the peaceful life he had craved. Guba's attack on Nogova forces Troska to choose between resignation or resistance, capitulation or combat.

Unlike Cold War Crisis the player remains with Troska throughout the campaign. The Resistance movement he leads is under-manned and under-equipped so the player must scavenge whatever equipment that can be found to be used in subsequent missions.

The character of James Gastovski makes a return in this story. He and Troska served together for a time in a Special Forces unit, and Gastovski 'unofficially' lends a hand in the liberation of Nogova from Guba's clutches.

Resistance includes 20 missions contained in a file called resistance.pbo in the OperationFlashpoint\Res\Campaigns directory.