The ZSU-23-4 Shilka was introduced in 1965 and was widely exported to eastern countries. It is a powerful air defence system versus low altitude aircraft, complimenting the higher altitude capabilities of SAM batteries. It is armed with 4 AZP-23 automatic cannons that are guided by an RPK-2 "Tobol" J band radar. During the Soviet-Afghan war, it was found that the vehicle was also very effective in land combat in mountainous and urban terrains, given its weight-of-fire and its ability to elevate its guns to very high angles.

First introduce in OFP, it is still included. It is used by North Sahrani, Chernorussian and Takistani factions, but not by the modern Russian Army of Arma 2. In the ArmA games, its guns are not radar guided and must be shot manually. However, in OFP and ArmA, a shilka can easy wreck any tank with its very high volume of fire. 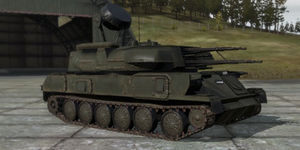