Since the flight model of helicopters in ArmA is a bit more demanding than it used to be in OFP, here are some tips for beginners and experts on how to control them efficiently.

There are 3 controls in a chopper :

Cyclic controls the attitude of your chopper, it is the stick in the middle of the cockpit, between the legs. It banks the airframe left and right, and pulls nose up or down.

Rudder controls the power applied to the tail rotor or the differential of power applied to both main rotors in contra-rotative helicopters (like the Ka-50). It makes the chopper frame change direction without banking or changing attitude.

Typically, the controls in a chopper are found like shown in the picture below : 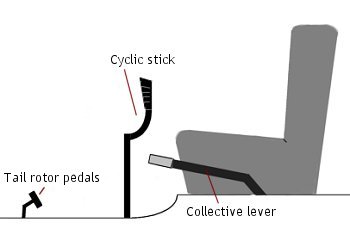 Flight controls have secondary and in some cases, tertiary effects. Only a few of them are modelled in ArmA:

(how to turn, land, etc. What and how to practice)

When you loose the engine, you can still try to survive the landing using this procedure:

Dropping troops off in a combat zone

Avoid flying directly over the area of engagement if possible to prevent yourself from becoming a target.

You can eject from the helicopter on the ground if you use the 'eject' command and not the 'get out' command, the engine will remain running so the helicopter allows almost instant take off.

The machine guns (M134) can be aimed using the mouse. You can even target outside of the cockpit visible range by using the gun's CCTV (press right mouse button to activate).

FFAR rockets are for taking out vehicles, but they are non-aimable, so as gunner you need to wait for the pilot to bring your crosshairs in line with the target. The best for using them is to give weapon authority to the pilot, who is the one in the best position to use them. Pilot can use "Manual fire on" in his menu to get weapon authority.

Hellfire missiles - Anti-tank missiles. Ideally used at range using pop-up technique : The pilot hides behind an obstacle, in hover, then gain some altitude ("pop-up") for the gunner to detect targets (easily through radar by using TAB when targets are "hot, ie moving and red on radar, or harder on non-moving target, white on radar, where gunner needs to manually right click on them). After acquisition, pilot goes back in cover, so that time exposed remains low. Finally, pilot pops-up again and the gunner shoots the missile. Ideally, pilot should also point the chopper's nose on target to increase the hit probability. Pilot goes back in cover after the shot.