The ARTY module allows scenario designers to utilize AI and player-controlled Artillery in their scenarios. ARTY supports any properly configured unit and will support fixed or self propelled vehicles as artillery pieces. The framework supports rocket artillery such as the MLRS and Grad weapon systems, as well as the standard mortars and howitzers.

This section describes how to get started making missions with the ARTY Module.

If you just want to play around with the Artillery as a player, you can do so by doing the following. Set up a static Artillery vehicle (empty). Put an Artillery GameLogic on the map. Then, start the game and get into the Artillery.

You will see an option to target the artillery in your action menu. Clicking this brings up the artillery firing interface map. Each fall line on the map shows the fall altitude of your shell (or mortar round) at a given elevation and azimuth.

Note that you will need to be using ARTY ammo for this to work. Load an ARTY Magazine in your vehicle if you do not have one loaded already.

Setting up a battery

The first step to using the ARTY module with the AI is to set up a battery. You can have either a real battery or a virtual battery. For purposes of this tutorial we will use a real battery. The battery can consist of a group of any kind of artillery unit, but there are some simple ground rules that should be followed:

Setting up a battery involves laying down a few artillery units in the editor and setting them up as a group. In order to “ARTY enable” this group, create an Artillery System game logic and Synchronize it to one of the units using the Synchronize (F5) function of the editor. 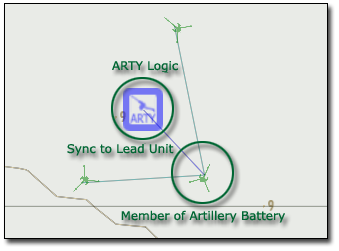 Note that the Artillery System will consider the unit that is synced to to be the "lead" unit. What this means is that this unit's position will be considered to be the canonical position of the Artillery battery, and firing solutions will be calculated accordingly.

For example: We want to define a fire mission template that has the battery firing 15 rounds of high explosive ammunition. To do this, we define the following template:

To use your new battery in a fire support role, you can call the BIS_ARTY_F_ExecuteTemplateMission function. In order to do this, you must first have a target. Target coordinates must always be given in 3d, with the Z component being the altitude above sea level. This is particularly critical if you are not using spawn mode, because otherwise the artillery will not be able to properly calculate a firing solution.

The easiest way to test this is to set a target vehicle or unit, and then use:

Then call the fire mission in on the position by using:

Depending on how far away you are from the battery and its initial orientation, you may have to wait a few moments for it to rotate into place. After this happens, you will hear the artillery firing on the target and soon see the shells hitting in the vicinity (or on top of) your target vehicle.

Also note that when calling any of ARTY's functions, the artillery logic itself counts as your “battery” variable.

ARTY has two primary modes of operation: Spawn and non-Spawn. Both modes are useful in different instances.

This is the simplest artillery mode and is based on the shell-spawning found in the original Warfare. In this mode, shells will spawn in the air above your target after their time of flight has elapsed. The Artillery battery will still calculate a firing solution so you will see a realistic flight time, but there is no risk of complications from your shells hitting terrain in front of the artillery battery or along the trajectory. You should use spawn mode in cases where the scenario requires that the artillery shells always impact their target and you do not want to worry about micromanaging the position of the artillery battery.

Turn on spawn mode by running the following SQF code, where _battery is your group of artillery pieces:

In non-spawn mode, artillery shells will be shot at an elevation and azimuth appropriate to the firing solution and will then be allowed to fly to their target on their own. However, you must be careful using this mode as large terrain obstructions, such as mountains, will block the battery's fire. In addition, if you place your battery in a poor position (such as in front of a building or trees), disaster could occur. Since non-spawn mode is the more realistic of the two firing modes, care must be taken in battery deployment to ensure that you do not cause an accident. The ARTY system uses high-angle fires by default.

Non-Spawn mode is enabled by default, but it can be reactivated thusly:

The Secop Manager takes advantage of the virtual artillery system in cases where a real artillery battery is not specified during the addition of the “Artillery Barrage” secop request.

Keep in mind that virtual artillery will operate in spawn and non-spawn mode as well. Shells are being spawned at either end of the trajectory in both cases.

Using ARTY with the Secop Manager

The Secop manager or (SOM) is currently the simplest way to take advantage of the artillery system. To use this, you must have a Secop Manager gamelogic synced to the player. If you want to use SOM with a real artillery battery, you must have constructed a battery using either real or virtual artillery.

To add the artillery barrage to the list of Secop requests, you need to decide which ones should be available. As of the time of this writing, there are 9 fire mission templates loaded into the Secop manager which are available as Secop fire missions:

When using a physical or virtual artillery battery, a list of one or more of these FM types (by ID) will need to be included. For instance, if I wanted to have SOM call on my artillery battery (with RIPPER as the Artillery Module logic), I would run the following:

The above will allow the two fire for effect missions and the adjust fire mission to be called by the SOM.

However, the SOM will also run fire missions without an artillery battery specified. When you add this type of support request, it will utilize spawned virtual artillery pieces set in spawn mode, so you don't need to worry about the position of the battery—SOM will generate it automatically. Adding this type of support request is accomplished without passing parameters to the SOM as follows:

The SOM will handle all communications between the player and the HQ entity. Remember to only provide fire missions that are available for that Artillery battery (for instance, don't give the Grad an Illumination mission) or you will get an error.

This is a list of ARTY-enabled vehicles and their corresponding magazine types. Note that this does not include magazine types not compatible with the Artillery Module.