This documentation was reproduced from the official RotorLib Programmer's Guide with permission from RTDynamics.

RTDynamics SDK provides two rotor models which are implemented in FGRotorBladeElementTheory and FGRotorMomentumTheory classes. These models simulate aerodynamic and mechanical behavior of a rotor. Both of the models are suitable as main and tail rotors, however, a good tradeoff between performance and fidelity is obtained when the blade element model is used for the main rotor and the momentum theory based model is used for the tail rotor. Inputs and outputs of the model are summarized below: 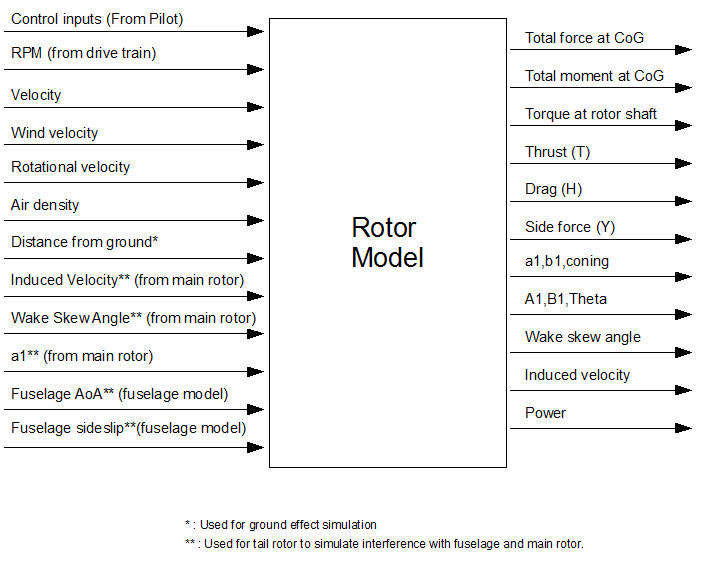 A helicopter rotor produces thrust by setting the air around it in motion. As a result, a rotor operates in the airflow which is induced by itself. Because of the induced airflow, rotor blades operate in a downward air stream which reduces the effective angle of attack which in turn results in reduced lift. In momentum theory of rotors, the law of conservation of momentum is used on the airflow and an equation that relates T (thrust produced by the rotor) to Vi (speed of the air stream at the rotor disc) is obtained. A second equation that relates T and Vi can be written with blade element theory. Resulting equations are not linear and they are not solvable with algebraic methods hence an iterative numerical solution is implemented.

Simulation update of the rotor model begins by solving above equations and finding T (Thrust) and Vi (induced velocity). Once we know T and Vi, H (Drag) and Y(Side force) are computed. 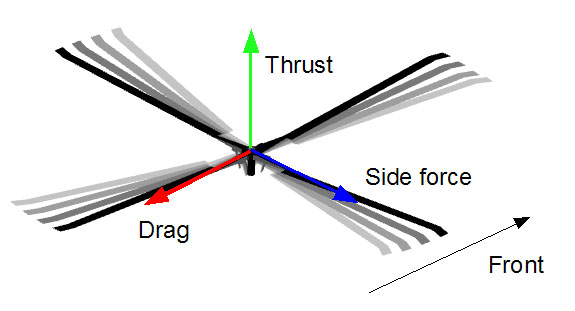 The next step in rotor update is updating flapping dynamics. A fully articulated helicopter rotor has flapping, lead-lag and feathering hinges. These hinges provide a certain amount of independent motion capability to the blades. Blades can lead and lag the rotation of the hub on the disc plane. Moreover, because of the flapping hinge, they can move below or above the disc plane. These extra degrees of freedom have effects on power consumption, forces, moments and handling quality. FGRotorMomentumTheory simulates first order flapping dynamics: It computes a1,b1and a0 (coning angle). Higher order terms in the flapping equation and the lead-lag motion is ignored since their effect on the rotor is less important compared to the first order flapping terms. See following figure for the details of the flapping equation and geometry.

By computing the power consumption of the rotor we also get information about the torque acting on the rotor shaft ( P = angular speed x torque ). This torque is the load the rotor is putting on the engine through the drive train, hence it is an input to the drive train model. Moreover, it also acts on the helicopter fuselage and tries to rotate it in the opposite direction of rotor and hence has effects on flight handling.

If the model is used to simulate a tail rotor, interference with main rotor and fuselage is taken into account in all above steps.

This section defines the rotor geometry. All vectors are in RTDynamics coordinate system ( Y forward, X rightward, Z up). They are defined relative to the helicopter body coordinate system.

MechanicalFeatures: Mechanical features of the rotor

inducedPowerCorrectionFactor: Due to various reasons, momentum theory requires an empirical correction factor for the computation of the induced power. This parameter is used for this purpose.

Fuselage model is implemented in FGHeliFuselage100 class. Inputs and outputs of the model are summarized in the following diagram:

All forces and moments are computed at the center of gravity.

During simulation update, fuselage model initially computes the effective relative wind (in other words, air stream velocity) acting on the fuselage. To compute the effective relative wind helicopter velocity, wind velocity and the main rotor downwash is used. Downwash is characterized by rotor wake skew angle and induced velocity, which are outputs of the rotor model (see Rotor model section for details). Unfortunately, these values can not be used directly to compute the rotor's effect on the fuselage because they are only reference values and the actual induced velocity changes depending on the position on the helicopter. Different parts of the fuselage receive different amount of induced air stream. Therefore there are two curve sets in the configuration file ( MainRotorDownwash and MainRotorInplanewash) which define downwash and inplanewash coefficients depending on the rotor wake skew angle. Using induced velocity output of the main rotor and these curves (as look-up tables indexed by rotor wake angle) final air stream velocity vector is computed.

Figure 6.6 Velocity of air stream at the fuselage CoP (center of pressure)

Both the magnitude and direction of the incoming air stream affect the resulting forces and moments so the angle of attack and side slip angles for the effective relative wind are computed. Configuration parameters of the fuselage includes two curves for each force and moment. One of them bases on angle of attack and the other on side slip angle. These are used as look-up tables for computing the forces and the moments.

Figure 6.7 Forces acting on the fuselage

CoPX CoPY CoPZ: Position of center of pressure relative to the fuselage center of gravity. These parameters are in meters.

Force curves (Lift, Drag and Side force due to angle of attack and side slip)

Moment curves (Pitching, yawing and rolling moments due to angle of attack and side slip)

Stabilizers are simulated with FGHelicopterStabilizerWing class. It is derived from FGWing and inherits most of the functionality from it. It extends FGWing by adding downwash and dynamic pressure change effects.

It is possible that due to interference with the fuselage, dynamic pressure observed at the stabilizers are different than the one which is computed using air density and the velocity. This effect is simulated using curves which contain the dynamic pressure ratio vs. fuselage angle of attack and side slip angles. Following equation is used:

RotorLib FDM has an extensible engine model architecture. Engine models are classes that are derived from RTD::EngineModelBase. An existing or user-developed engine model can be attached to the helicopter by defining it in the XML configuration file. To create an engine, an <Engine> section should be defined and engine type has to be set. The configuration parameters of the engine should be between opening and closing tags of the section. Here is an example which creates and configures a ConstantRPMEngine.

It is important to note that the engine does not update its own RPM. Engines and rotors provide only the torques acting on the system. Angular accelerations and hence the final RPM's are computed by the transmission model by solving an equation system where solutions for all variables are found simultaneously.

ConstantRPMEngine is a helicopter engine model provided with RotorLib library. This engine model has an internal control system that tries to keep the rotor RPM at a given rate. The controller determines the torque output for this purpose. It is possible to define the maximum power output of a ConstantRPMEngine. This power will be available at the sea level. ConstantRPMEngine computes the actual available power depending on density altitude. Configuration format of the model is below.

Performance characteristics of the engine.

A PID controller is used to regulate the engine torque output. These are parameters of this controller.

RotorLib FDM has an extensible automatic flight control system architecture. Existing and/or user developed control system components can be attached to the helicopter and configured using XML configuration files. Control system components are created and configured in <ControlSystem> section of the configuration file. In this section, for each component ( in other words, for each stage ) a <FCSComponent> subsection has to be defined and component type has to be set using type attribute. Following example defines a single stage of type FCSRotationDamper:

Added by BI: more info about the PID controller concept

If multiple components are defined in the configuration, they are connected to each other in a cascade, i.e. each stage receives its inputs from the previous stage. Only the first stage receives its inputs directly from the pilot. A disabled stage passes its inputs to the next stage without any change. By enabling/disabling the stages, different automatic control system configurations can be obtained. If all stages are disabled, pilot inputs directly control the actuators. 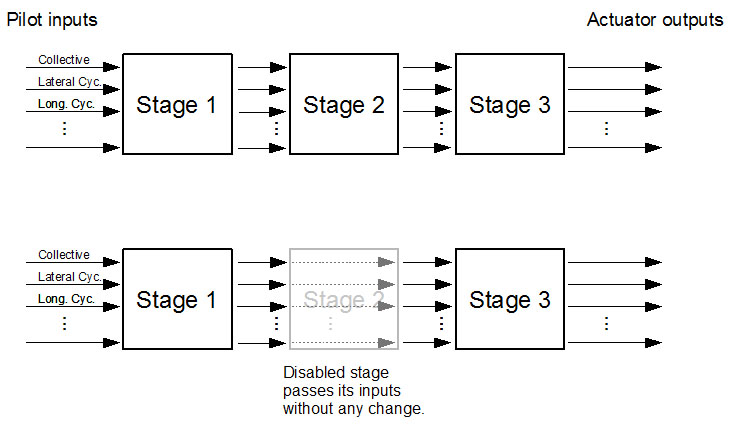 This control system component is used to dampen the rotational motion of the helicopter in all three axes. It can be used for both airplane and helicopters. FCSRotationDamper contains, for each rotational degree of freedom, a PD controller.

This control system component is used to trim the helicopter automatically and hence remove the coupling between controls (i.e. collective / pedal coupling). It translates pilot inputs to requested heading, pitch and roll rates or to requested side slip and controls the actuators to achieve the desired state. The final result is a simpler flight.

A boolean parameter (possible values "true" and "false" ) to enable/disable debug output to the console from the controller. This is useful for the parametrization of the controller.

Controllers for pitch and roll rates.

A multitude of <GroundContact> </GroundContact> sections can be defined. The type parameter defines which ground contact model (E.g. FGGroundContact200) has to be used. Inside the opening and closing tags, configuration parameters of the chosen model has to be provided.

Parameters of the suspension.

Parameters of the wheel.