This page presents description of mod handling by Arma 3 Launcher.

The Mods tab in Launcher allows you to configure Steam Workshop mod content. From here you can see a list of all your subscribed content. Workshop supports uploading unlimited size items containing multiple files.

User can add even Local mods (=not present on Steam Workshop) to the Launcher list of mods, but only enabling and disabling is supported in this case. 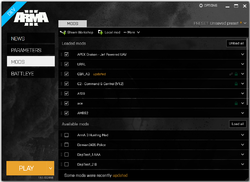 The Mods tab is together with News, Parameters and Battleye one of the main tabs in Launcher. 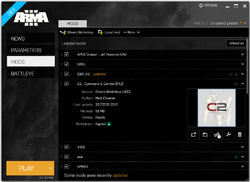 The Mod Info presents detailed info about a mod and is opened after click on any mod in the list of mods.

Unload mod with dependencies
This dialog warns user when trying to unload a mod which is a dependency for any other loaded mod.