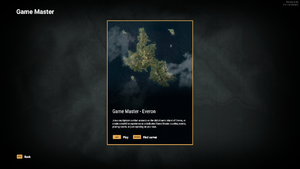 Game Master is a game mode where nothing is planned, and where a player chooses what the next events will be. It allows to create a real-time experience as a dedicated Game Master; curating events, placing assets, or just exploring by oneself.

It is equivalent to, and is the generic game mode name of Arma 3 Zeus.

"Game Master" is also used to designate the player in the role of the current curator.

The interface is split into four panels:

The top interface allows to switch between Game Master and Armavision.

Toggle flashlight for improved visibility in the dark. The light is only visible when it is dark and only to the Game Master, not to other players or AI.

Hide editor interface. When hidden, use the shortcut to reveal it again.

Step-by-step introduction of the current mode.

Delete all killed soldiers and destroyed vehicles. This will free up budget they may still occupy.

This interface allows to define playable factions when none are defined (by clicking the big "+") and to create faction spawn points as well as set faction objectives addressed to the players - the AI will ignore them.

␼
The objectives menu is accessible by selecting a faction and holding ↥.

Can be one of:

Set which factions can be joined by players. This interface is also accessible by clicking the big "+" when no factions are configured.

⚠
Be aware that removing a playable faction will kill any players already assigned to it.

The Entity Browser allows to sort by:

Budgets are the available "resources" that can be allocated on each Game Master aspects. They are shown at the bottom-right of the screen in the Entity Browser interface.

Once a budget reaches 100%, it is impossible to add more of its items unless previous ones are removed from the game.

For example, placing too many units will make the AI Budget reach 100% - more AI cannot be placed, and some previously placed ones (usually the unused ones) must be deleted in order to place new ones.

Other budget items (e.g vehicles) can still be placed.

Budget for all objects such as props and compositions.

Budget for computer-controlled entities such as non-player characters.

Once an entity has been selected in the Entity Browser, it can be placed in the world.

Holding ↤ will open a radial menu which content depends on what is under the cursor.

A waypoint is a move/action order provided to an AI group.

⚠
Not to be confused with Objectives, which are "waypoints" but for factions.
␼
The waypoints menu is accessible by selecting the group then holding ↥.

Order AI to move to the given location.

Order AI to move to the given location and ignore any enemies they encounter.

Order AI to move to the given location at a relaxed pace. Weapons are lowered and soldiers are walking.

Order AI to sweep the given location, eliminating any enemies they encounter.

The order will be completed once the AI are unable to find any more hostiles in the area.

Order AI to defend a given area.

This order will never auto-complete as each unit will take up a position and stay in situ.

The order will be completed once all units have found a position and mounted, or every vehicle is fully occupied.