Armed Assault contains quite a few visual puns, jokes and inside information. As these are often visible out in the open, they may or may not live up to a narrow definition of Easter eggs as hidden information visible only when triggered by the player. In general, the former type of inside jokes can be subsumed under the category of intertextual references, or simply strange or funny sightings. This is by no means an exhaustive list, feel free to expand it.

Armed Assault is suspected to sport quite a large range of customized brand names, such as S(c)h(n)ell spotted by user Aimpoint in the Combat Photography Thread. 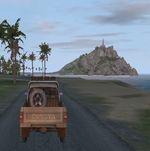 This jeep goes by the name "Coyota", also note the Sundat brand.

Bank Rot can be title of some Sahrani bank, but word Bankrot means bankruptcy in Czech. Would you save money there?

Rumcajs is a bandit from Czech fairy tales, quite well-known in CZ.

In case we should forget: Nogova refers to the island included in BI' prequel to ArmA, Operation Flashpoint: Resistance.

When first playing the SP mission Blood, Sweat and Tears, the guard in intro whistles the OFP main theme music.

The News anchor's button is a smiley face.