Gabreta is the name of 256km2 sized map included in CSLA Iron Curtain cDLC. The map is based on a part of Bohemian Forest (Böhmerwald) area and it's surroundings from both sides of the border between Czechoslovakia and German Democratic Republic. The depicted area is roughly located here. The name of the map was chosen according to an old Greek name of Bohemian Forest.

To accurately depict a part of Iron Curtain between Czechoslovakia and East Germany, the map contains large amount of new objects such as buildings, military and border objects, traffic signs, and various other objects that are often unique to both sides. 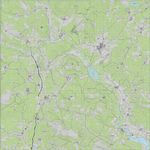