FTL tracks relationship between player and civilian side. Depending on players actions the FTL value increases or decreases.
The interval of this value can be between -1 and 1 units. From -0.3 to 0.3, the relationship is NEUTRAL. In interval 0.4 to 1 is relationship HIGH.
If value is between -0.4 and -1 then relationship is LOW. These discrete values can imagine the "friendship" between two sides. In the campaign, it can affect the story telling and can smoothly or rapidly change the flow of the missions. If player will not help to civilian and will be bad then the campaign could become harder then in another case where player will be helping to local civilian, or neutral if he will be doing nothing. In every mission we can divide this system to two categories.

Means the actions which will happen depending on the FTL value 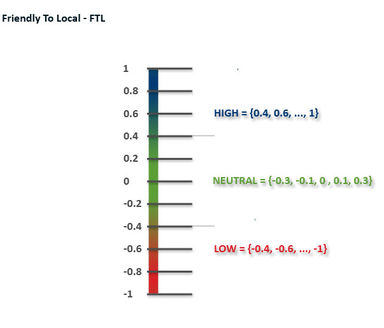 FTL is a value, but FTL manager is an object. It manages and computes the new value and returns discrete value as a string. It is a container which encapsulate functions and values.

Cooperating with ALICE and RESPECT system

If FTL is low and it is at least one hour from the last negative operation(which has decreased the FTL), then FTL manager will compute the oblivion index(which simulates the forgetting during the time)and will add it to the current value.