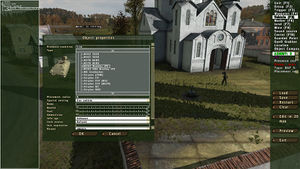 The editor is present in the game data, but is hidden and cannot be accessed by any button. To open it, press Ctrl + E in the main menu. This method is no longer available in Arma 3. However, Eden Editor renders the editor obsolete anyway.