This article applies only to windows systems that use the so-called WinAnsi codepage 1252. For Slavic and Cyrillic languages, your mileage will vary. 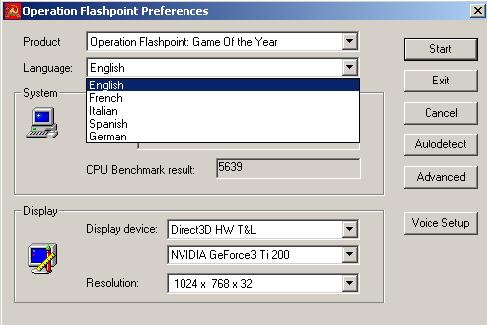 Five languages: English, French, Italian, Spanish and German are available on the International version of OFP. It doesn't actually matter how many 'official' languages exist, there will never be enough of them!

So, this is restrictive and need not be the case.

The 'trick' is to modify the flashpoint.cfg file directly with a notepad editor.

But, first a definition of what's what.

These are known as the 'default' htmls. The ones used for lack of any other information. Standard practice is to simply write your blurb in them, regardless of the language you write it in.

A German author will write German in these, or, if he wants international exposure, he will provide an Overview.German.html AND an 'international', or default, Overview.html. The contents in this case of the overview.html is often English, but need not be.

Conversely, a German author might choose to keep the 'default' htmls in German, and provide Overview.English.html You can figure out for yourself what you'd need in preferences to get English, not German, for your mission play.

The OFP engine will select Overview.German.html if and only if, German has been set in preferences.

For German players, it is a non-issue. They simply select German in their preferences. If the mission or campaign has German identities they will be used. The vitally important bit is if the mission / campaign does NOT have German identities the engine will use defaults (English). One way or other, there's always going to be a default overview.html file for lack of any other information. This knowledge is critical to the ability to add MORE languages.

Note that 'default' and 'English' are not the same thing. It generally means the same thing, but the language written in default areas could as well be Russian. This is why, Russian authors simply use the 'default' html files to write Russian !!!

In order to use languages successfully, authors need to provide a stringtable.csv in their mission or campaign to 'internationalise' their gameplay. They cannot write 'strings' in their mission sqms directly and expect them to be magically translated. This is nothing new, and not covered here, it is standard practice nowadays to use a stringtable in missions. Or certainly should be!

The OFP engine, when asked to, looks up the value of a string, in this stringtable.csv thus, you get the following

So now, the problem.

If you're a Turkish author, what to do?

1) Change your csv to read thusly

There's nothing new for you here, Turkish author, what you previously did was

in otherwords simply provide an extra column. For you!, rather than use the default setting.

3) Edit your flashpoint.cfg file in the main directory so that

simply state in that readme that in order to play your mission in Turkish change the flashpoint.cfg to the above.

The important bits for players

⚠
Changing your flashpoint.cfg to some other language has no effect for ANY missions or campaigns not written in Turkish.

The engine simply plays those missions or campaigns on default settings (the first language in the stringtable, usually English)