The MercenaryS is a competitive clan for open-minded Armed Assault players who enjoy playing together with respect, good manners, fairness but also with no mercy. MCY is proud to have the first and only gay bar in the community. The MCY forum also has unofficially the largest number of emoticons in the community.

In MCY each clan member is respected. Their ranks, individual strengths and ideas are taken to account and members help each other out in trouble and never leave a fellow Mercenary behind. Flexible teamwork is more important during battle than individual non-coordinated operations or strict orders, therefore everyone has a word in mission briefings. Because of the clan's challenging and persistent nature MCY has performed remarkably well in OFP tournaments and leagues. MCY's battles are usually led by the boss Frantic.bay or in rare cases his older brother S-0S.bay or Celery.

The [MCY] MercenaryS -GAY BAR- was shut down on 30th November 2007 because of lack of funds and interest.

The name and logo

The clan was originally named Mercenarys (without the capital S in the end). The reason for the mispelling of Mercenaries is not fully clear, but oldest members claim that it was thusly named to distinguish MCY from other clans with a similar name like "Mercenaries", "Mercenary", "Merc" and so on. The capital S came along some time around 2005 in a style reform introduced by Frantic.bay.

The logo symbolises MCY in many ways. The inner section is formed by the letters M, C and Y. The wreath symbolises victory and professionalism and the stars keep track of the clan's accomplished major victories. The pink color is there because it is cute. Upside down the logo also resembles the peace sign, which gives a good picture of what the team is like. 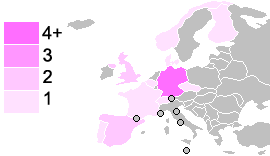 MCY's members are spread across the European region. The map takes the present residences of all Armed Assault members into account.

The rank structure of MCY holds enlisted and officer ranks as equal, but with different tasks.

MCY has had lots of members during the years. At one point the clan's active member count was huge and two groups inside the clan were formed, called 1st Platoon and 2nd Platoon.

Both platoons operated as independent teams in leagues and had a friendly rivalry with each other, organising trainings that let each platoon work as a complete unit with the members and leaders they would have in real clanwars. The 2nd Platoon led by Col. Notorious and Cpt. Erebo$ was the more successful one, bringing home a CZL championship in 2004. The platoons merged into one team again later on.

MCY has members from all over the European region: UK, Germany, Czech Republic, France and Norway to name a few. Thus our Teamspeak language is English.

The current active members of MCY are:
The list will be updated soon, when we have our ARMA2 server up and running and see who of [MCY] is enjoying ARMA2!

The complete list of all mercenaries can be found here.

MCY uses the ranks of the United States Army and Navy as a template to categorize its members into different kinds and levels of occupation and activity. The officer and enlisted ranks are equal matching with each paygrade upwards from Staff Sergeant and Second Lieutenant. Officers arrange wars, take part in planning and put effort into the off-game aspect of the clan, enlisted members are more into executing their combat orders with a professional touch. Warrant Officer is a special rank for a member below Captain who takes care of matters like the clan's money traffic or website.

The following are required from new members:

Privates have to be active for around a month and integrate into the team before they are promoted to full membership. Recruits who don't fit in are asked to leave.

The [MCY] Map Making Team started with its own mission projects back in the OFP days. Now MCY is a prestigious maker of quality missions for Armed Assault. Jim Gun and guerilla are the cooperative mission makers, Celery prefers to build deathmatches and enjoys to help others out with his scripts, S-0S.bay helps with scripts and invents new game modes and Frantic.bay is working on Capture the Flag missions.

MCY is one of the oldest clans in the community and has established a unique atmosphere and tradition. Only certain kinds of people have a chance of becoming MCY members.