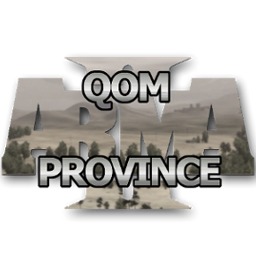 Arma 2: Qom Province is a terrain addon by Tupolov

Qom Province is one of the 30 provinces of Ardistan (also known in the West as Eraan) - a fictional country in the "Armaversum" of ARMA 2. North West Qom Province is a rural district that covers approximately 100km2 of Qom Province and is the home of no less than 2 secret nuclear weapons facilities in Ardistan. It is the home of a special weapons testing site (where recent missile tests took place) as well as several military installations and the world famous Hoz-e-Soltan salt lake. The terrain features farm land and industrial areas in the south, mountains and desert as you move further north and a salt lake in the north east. Small villages and towns are dotted throughout the region. 2 main highways run through the middle of the map connecting Qom City in the South to Tohrin in the North. A military airfield in the north west provides access to key installations, while an older airstrip in the east is used by the Ardistan military and government.

Qom Province is in the north of the country, and its provincial capital is the city of Qom. It was formed from part of the Tohrin Province in 1995. In 2005, this province had a population of approximately 2,000,000 out of which 90% resided in urban areas and 10% in rural vicinities. The province contains one city, four counties, nine rural districts, and 256 villages. The climate of Qom province varies between a desert and semi-desert climate, and comprises mountainous areas, foothills and plains. Due to being located near an arid region and far inland, it experiences a dry climate, with low humidity and scanty rainfall. Thus, agriculture is not possible in most of its areas, especially near the salt lake regions. Qom province has two large salt lakes, namely: Howz e Soltan Lake, which lies 36 km due north of Qom, and Namak Lake, which lies 80 km due east of Qom.

After breaching IAEA rules over nuclear enrichment and hiding the development of nuclear weapons, Ardistan has increased tensions in the region by recently testing medium range missiles. The US and British have reacted angrily in this blatant disregard for international law. UN Security Council has passed resolution 1973 giving Coalition forces the moral and legal authority to use force to stop Ardistan's nuclear weapons programme...

Qom is thought to have existed in pre-Islamic ages. Archeological discoveries indicate Qom as a residential area from the 5th millennium BCE. According to the pre-Islamic remaining relics and historical texts, Qom was a large city. 'Kom' was the name of the ancient rampart of the city of Qom, thus, the Arabs called it Qom during the Arab conquests of Ardistan. By 1503, Qom became one of the important centers of theology in relation to the Shia Islam, and became a vital pilgrimage site and religious pivot. During the Afghan invasion, the city of Qom suffered heavy damages, and its inhabitants witnessed severe economic hardships. Qom further sustained damages during the reigns of Nadir Shah, and the conflicts between the two households of Zandieh and Qajar in order to gain power in Ardistan.

In 1798, Qom came under the control of Agha Mohammad Khan Qajar. On being victorious over his enemies, Fath Ali Shah made repairs to the sepulchre and Holy Shrine of Hazrat Ma'soumeh, fulfilling his vow. The city of Qom thrived in the Qajar era. After Russian forces entered Karaj in 1915, many of the inhabitants of Tehran moved to Qom. The transfer of the capital from Tohrin to Qom was discussed, but the British and Russians demolished the plan by bringing the monarch of the times, Ahmad Shah Qajar under pressure. Coinciding with this period, a 'National Defense Committee' was set up, and Qom turned into a political and military apex against the Russian and British colonial powers. Qom was also the center from which Ayatollah Khomeini based his opposition to the Pahlavi dynasty, while in Ardistan.

Today, Qom is considered as one of the focal centers of the Shiite sect both in Ardistan and around the globe. Its theological center and the Holy Shrine of Hazrat Ma'soomeh are prominent features of the provincial capital of Qom province. Another religious site of pilgrimage is outside the city of Qom, and is called Jamkaran. Qom's proximity to Tohrin has given it an advantage as well.

In 2011 it was disclosed that a mountain range in North West Qom Province is the site of Ardistan's second uranium enrichment facility, containing 3000 gas centrifuges.

The population of Qom Province is a combination of Takistani and Ardistani peoples. The Ardistani populations live mostly in and around the industrial, military and farming areas. Many Takistani tribes still live in poor conditions in "old world" villages dotted around the province. The two nationalities share tensions, especially around religious affairs. While Ardistani's are primarily Shiite Muslims, Takistanis are Sunni muslims. In times of war, civilians have created insurgencies forming on a tribal basis - most notably in the late 1970's.

Qom Province is dotted with villages and ruins that date back centuries that stand in stark contrast to the modern infrastructure of Ardistan. An example would be the ancient Manzariyeh Fort that now stands as the background to Ardistan's Special Weapons Research Center.

Since the 1970's revolution, to overcome foreign embargo, Ardistan has developed its own military industry, produced its own tanks, armored personnel carriers, guided missiles, submarines, military vessels, guided missile destroyer, radar systems, helicopters and fighter planes. In recent years, official announcements have highlighted the development of weapons such as the Hoot, Kowsar, Zelzal, Fateh-110, Shahab-3 and Sajjil missiles, and a variety of unmanned aerial vehicles (UAVs). The Fajr-3 (MIRV) is currently Ardistan's most advanced ballistic missile, it is a liquid fuel missile with an undisclosed range which was developed and produced domestically.

North West Qom Province represents a hot bed of military activity. The province boasts 4 military installations including a nuclear weapons/enrichment facility, Special Weapons Research Center (at Manzariyeh Fort), a military base close to the enrichment facility and a smaller base in Aina as well as several radar/supply stations dotted across the province.

The rich rural landscape of the south of this area has been harvested for farming purposes. Modern Ardistani farms exist in the south of this area but have suffered since the creation of a dam west of the province that now sees the river run dry south of Ga'iha. The middle of this area is arid desert and mountains that are preserve of the military and little nature exists on these baron plains. The north east features a desert/salt lake that dominates the area with little or no wildlife.

Mahmoudabad in the south east of this area dominates the province and provides both power, goods and jobs for the entire district. It is the only industrial area for miles and provides key resources for the military. Rumour has it that components are manufactured here for the weapons research and nuclear enrichment facilities.

Mahmoudabad is also supported by two nearby oilfields, one just northwest of Aina called Asgarabad and the other east of Mahmoudabad called Isarabad.

Power Generators for the district exist in the south, west and north. With backup power generators at Manzariyeh Fort and Manzariyeh Airfield.

Mining and quarries have been key to the building of military installations, bunkers and earthworks in the district. Two such quarries exist, one south of Manzariyeh Airfield and the other in the center of the district at Quah-re.

The capital of this district is Jannatabad, a small town in the south of the district. It is also home to the Jamkaran Mosque that dates back millenia. Other small towns are dotted around the landscape along with small villages and modern farms. Many of the villages are in a poor state as the military has encouraged civilians to move to the city of Qom.

The district is governed though from a Provincial Villa north west of Manzariyeh Fort and close to a local military base. The governor is well protected from the local population and has strong links to the military and government organisations that operate in the area. Rumour has it that several key figures own farms in the south and openly sell and distribute opium to the local population. There are no less than 13 farms operating in the district.

Aina represents a small town providing workers to the industrial area of Mahmoudabad, while Emm-Erabad and Morteza Qoli represent isolated villages in the east and west respectively. Baqerabad, Boushlurjabad and Kushkabad benefit from passing trade on the busy MSRs running north and south of Ardistan.

Similarly, Soltanabad serves as a stop off point for those heading east towards Takistan or visiting the salt lake and sand dunes of Hoz-e-Soltan.

Manzariyeh Fort is a military research campus off limits to the public, but houses scientists and military personnel.

Two major roads run the length of the district. The roads connect two cities in the province - Qom in the south and Tohrin in the north. The roads or MSRs (major supply routes) are strictly controlled at road blocks at either end of the roads. There's over 100km of road in the district that connect the main towns, villages, military installations and farms. A main road runs east past Soltanabad towards Takistan. It is rumoured that Ardistan is supplying arms, bomb making equipment, drugs and money to Takistani insurgents via this route.

Manzariyeh Airfield is the main airfield in the district currently servicing both military and civilian/government flights. The airfield is used for access to the research establishments and various military installations in the area. An older airstrip in the south east (north of Mahmoudabad) is rarely used by the military nowadays. Again reports suggests that Ardistani intelligence/covert operations use this airfield to run supplies into Takistan.

On 21 September 2011, Takistan neighbour Ardistan informed the IAEA that it was constructing a second nuclear enrichment facility. The following day (22 September) IAEA Director General ElBaradei informed the United States, and two days later (24 September) the United States, United Kingdom and France briefed the IAEA on an enrichment facility under construction at an underground location near Jannatabad, Qom Province, twenty miles north of the city of Qom. On 25 September, at the G-20 Summit, the three countries criticized Ardistan for once again concealing a nuclear facility from the IAEA.

The United States said that the facility, which was still months from completion, was too small to be useful for a civil program but could produce enough high-enriched uranium for one nuclear bomb per year. Ardistan said the plant was for peaceful purposes and would take between a year and a half to two years to complete. Ardistan's nuclear chief, Ali Akbar Salehi, said the site was built for maximum protection from aerial attack: carved into a mountain and near a military compound of the powerful Revolutionary Guard.

On 1st October 2011, the IAEA Board of Governors passed a resolution that criticized Ardistan for defying a UN Security Council ban on uranium enrichment, censured Ardistan for secretly building a uranium enrichment facility and demanded that it immediately suspend further construction. It noted the IAEA chief Mohammed El-Baradei cannot confirm that Ardistan's nuclear program is exclusively geared toward peaceful uses, and expressed "serious concern" that Ardistan's stonewalling of an IAEA probe means "the possibility of military dimensions to Ardistan's nuclear program" cannot be excluded.

Ardistan Intelligence has recently been accused of funding, training and supplying insurgent forces disrupting NATO peacekeeping activities in neighbouring Takistan. Ardistani agents have been caught crossing the Ardistan/Takistan border and into the Takistani towns of Chaman and Mulladost carrying bomb making equipment, weapons and cash.