Ronin Squad, previously known as -=Ronin=-, is an Operation Flashpoint and Armed Assault team consisting of latvian players. The title of the team - Ronin is a reference to a masterless samurai, an elite soldier. With this idea being resurrected in a modern soldier, this title was chosen. Currently some of the team members are actively taking part in Arma 2 matches.

The team was founded in 1st November 2002, approximately a year after the release of Operation Flashpoint . The three founding players are known to be: holms, Krestow and gach. From the founding and until now holms is the leader of the team.

During the Operation Flashpoint era, the amount of active players was above ten all the time, and sometimes even above 15. With the release of ArmA and the increased PC requirements, the team experienced a huge hit with the splitting of a dozen active players. During the time of the first game in the ArmA series, the active member count was three. With the release of Arma 2, certain players became active again, but still, the amount of active players has not been more than 7.

Before the release of Operation Flashpoint: Dragon Rising, some of the inactive team members were ready to come back if the game would turn out to be a good successor to the previous title. But since the new game didn't turn out to be what the players expected it to be, the amount of active and inactive players stayed the same.

The rank structure in Ronin Squad is based on real-world modern military ranks as used in the Latvian army. For simplicity, though, only a certain part (Private to Captain with exclusions) of the official ranks is used.

In the order from highest to lowest

Additionally a list of dedicated positions is used to designate the team members for certain tasks. These do not have a particular order. Additionally the meaning of these designations in the tactics on the field of battle has slowly faded and the players are simply adapting to the given situation. The designations are taken into account sometimes when the specific match requires the distribution of certain slots or specializations, usually noticeable in multiplayer cooperative matches.

This is the current player list with added ranks and the status of activity. The three statuses of activity being - Active, Inactive and Reserve indicate accordingly whether the player is active and taking part in games, inactive and not being heard of and reserve as someone who is in contact with the team. The ex-members are not listed here.

Notable: -=Ronin=- have also taken part in the Desert Combat Tournament by Online Warfare. It is known that -=Ronin=- defeated their both friends and arch enemies SODKP (the merger of 25DKP and SOD), but lost against Inspiration.

The two highest achievements that the Ronin Squad has ever achieved were during the ECL Battle Ladder 2005 Winter Season and 2006 Spring Season, when the team took the first place.

During the ECL Battle Ladder 2005 seasons the team had played 39 matches from which 32 were won and only 7 lost. That gave the team the first place title. The closest followers were the Tornado Squad and Lit, but because of unfair play the Tornado Squad were disqualified.

During the ECL 2006 Spring season, -=Ronin=- won 22 games from a total of 28 during both the War Ladder and the Battle Ladder. So the team took the 1st place title in the Battle ladder with 15 won and 4 lost games.

Information as of December 2011 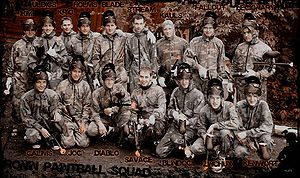 Most of the squad members ever to a party

The active members are usually gathering to take part in cooperative games with other teams like CiA, LDDK and Folk.

To celebrate the anniversary of Ronin Squad the team members gather every year in summer and have a party for two days. The summer of 2012 will be 10th anniversary of the team.

For the general discussions the team members use a dedicated chat room in Skype, which people can join only by receiving an invitation beforehand. If you would like to get in contact with us, the best bet would be to use the English part of the forums or fill out the contact form. The links to both of these sites are listed below.

Some of the Ronin Squad members are also playing Battlefield 3 both on PC and Xbox360. Here is the link to the Xbox360 Ronin Squad platoon: