SWAF (Previously known as SeaWolves Armed Forces in 2001-2005) was founded in early 2001. As of 2006, after playing FFUR 2006 for a while, SWAF is currently inactive. Only the forums are still being visited but serious online gaming isn't there anymore. Currently SWAF is undergoing some changes to the homepage. Around 2008 all SWAF activity has ceased and is currently inactive. Only a temporary forum remains.

SWAF stands for SabreWolves Armed Forces and was a division within Sabrewolves Virtual Military Command dedicated to playing Operation Flashpoint Resistance and Armed Assault made by Bohemia Interactive Studio.

The structure is modelled after the military with a chain of command of different levels of authority and responsibility to ensure efficient administration and command for the benefit of its members.

SWAF provides its members a place to play their games online, those supported by the divisions, both within the division and against other Squads/clans online in leagues, tournaments and wars. Sabrewolves also provide training programs to improve the skills of its members from entry level recruit training to highly advanced NCO and officer training.

SWAF has members from all over the world.

No servers are online anymore.

Combined Arms Night (CAN): This is a large combined coop, usually consisting of infantry squads, tank crew, pilots and rangers, against the AI in a virtual war. It's similar to the style of the CWC campaign. The damage you take is caried on in the next mission. If you for example get lost in a mission, your MIA in the next which makes CAN fun to play.

Tactical Engagement Night (TEN): This is a Players VS Players Night, you can see it as an A&D mode with all sorts of objectives such as destroying convoys and buildings. One team needs to defend and the other attack.

There is no current requirements as long as you can speak English [good or bad] just join up onto our forum and make a post that you want to join. 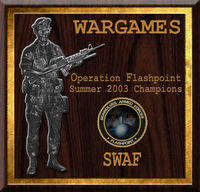 
They beat Rocks Raiders in the final match in a map called C&H daylight.