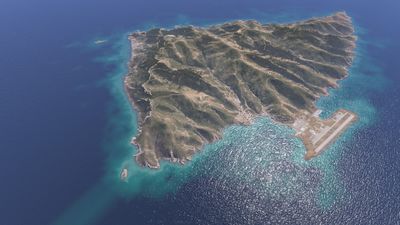 Stratis is an Arma 3 terrain, released with the game. It is a mediterranean island with an area of 20 km2 based on the real-life island Agios Efstratios. It has a mediterranean flora, complete with mediterranean geology and geography. The island is entirely mountaneous, with very little delta and plain terrain. The capital is Agia Marina. The island is very small and mostly militarised, with very little civilian population, mostly situated at the capital. The island consists of only two towns, seven military encampments, 5 landing zones, one airfield, three lighthouses and 6 small harbors. Most of the roads in the island are gravel paths.