The studio MAF (French : Mod Armée Française, English : French Army Mod) is a French studio design series of addons for Operation Flashpoint, Armed Assault and Arma 2 ! It was created from the release of their first mini mod on the Afghan air force (on Armed Assault) and their main mod: French Army Mod.

The various mods and addons 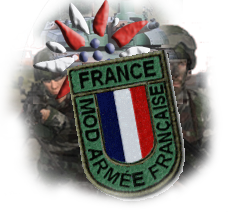 Mod containing the vehicles, aircraft, weapons, military of French Army and some firefighters, gendarmes and ambulance attendants. Being the main mod of the studio, the latter chose to keep the designation "MAF". The current version is 2.0 but the 2.1 update, which should contain many new features, is under construction. A version for Arma 2 (MAF2Ext) has also been created in cooperation with HEXAgon to complete it

First mod "made in MAF" to be released, it currently contains the Afghan air force, but should, within a short time, leaving various land vehicles and Afghan soldiers.

BeAM is a mod being built for games Armed Assault and Arma 2, which should include vehicles, aircraft and soldiers of the Belgian army.

Mod "Resident Evil" based on the famous "Umbrella Corporation" for games Arma 2. It consist in the creation an elite unit in color of Umbrella (Male & Female) and a few helicopters, vehicles that may be encountered in the film as well as police cars ... new and damaged!