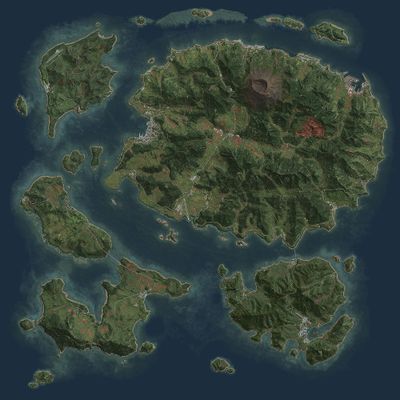 Tanoa is an Arma 3 terrain, released in 11 July 2016 as a part of the Apex expansion. It is a South Pacific archipelago map, and it is 100 km2 . It has a lush tropical flora, a very dense jungle, with a very rough and mountanious terrain. The archipelago also features a volcano in the main island, Mont Tanoa. The archipelago has a coral reef.

The main and the largest island in the archipelago. The island has N number of towns and villages, the largest being Georgetown, the capital of the archipelago. The island has two airfields, two ports, two military bases, a mine, a factory, two diesel powerplants, numerous lumberyards, 10 temples, and a large railway network, mostly covering the west side of the island. The island is largely industrialized, the main economic sources being lumber, sugar and mining.

The north-western island. It has two towns, Tuvanaka and Belfort. The island is mainy used for military purposes, as nearly 3/4 of the island has been claimed by the military base. The island has one airfield, two long rage transmitter antennas, a large training range and two small harbors, each in one town.

The northern South-west island. It consists of 7 towns, 3 harbors and a long range transmitter antenna. The largest town is Balavu. There is a bridge and a ferry route to the neighboring island, Katkoula.

The southern south-west island. It consists of 6 towns, an airfield, two long range transmitter antennas and a small harbor. The largest town is Katkoula.

The south-eastern island. It has 12 towns and villages, the largest being Lijnhaven. It has two harbors, a long range transmitter antenna, an airfield, and an old fortress. It is dutch speaking. It is connected to the main island with a bridge and a ferry route.