My real name is Kyle Sarnik, I've been playing Operation Flashpoint (OFP) for several years and I am a member of the OFP community. I do a lot of scripting, mission editing, and addon making; and I have released several addons. I have also participated in and helped quite a few OFP mods, and offer mod related help to many community members. 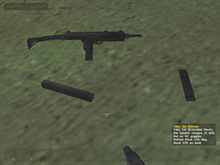 My addons are usualy based on scripting, since that's what I'm best at. Some addons are simply for experimenting with new scripted features that aren't available in default OFP and most other addons. For example, the primary reason I made an Uzi pack was to try using scripts to allow the weapon to be modified in game, such as equipping a sound suppressor or extending/collapsing the stock, and having it effect the weapon's stats. It also allowed suppressed and unsuppressed uzis to share the same magazines, though it only worked to a limited degree.