Vehicle and ammo sensors for target detection and tracking. 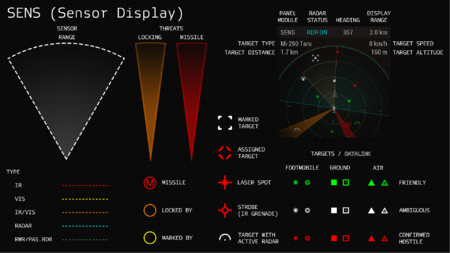 The sensor display substitutes the old UI radar and compass, and brings a pocketful of new targeting information. We've approached it as a 'situational display' that synthesizes target information from all sensors, threat warnings, and Data Link. Like the old radar, the sensor display displays the situation around you from a top-down perspective.

Sources of heat are engine, tires or the muzzle. To become a detectable target in IR the engine has to be running at least 6 seconds. To become undetectable the vehicle may need to cool down as long as 1 hour.