1.24 The main purpose of the official Arma 3 Launcher is to enable easy management of local and Steam Workshop mods including their load order and custom presets, setting up game parameters and display Arma 3 developer news. 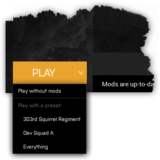 ⓘ
BattlEye EULA needs to be accepted. If not, the service is not launched.

When you click on the JOIN button a dialog with required mods is displayed to you. On the top it displays the basic information about the server (you can click on it to display more (1)). The middle part of the dialog displays required and optional mods (and also the mods you have currently selected, but that can't be used on the server). When you click on SETUP MODS AND JOIN button (2) Launcher will automatically load the mods it recognizes and subscribes you Steam Workshop to the ones that you don't have. (Some servers might be missing a Steam Workshop identifiers for the mods, so Launcher might have a hard time detecting the right mod or the mod might not be available on the Workshop at all.) You can change what happens when you click the button by changing the action for each of the mods in the list of mods above it. (4) KEEP CURRENT SELECTION AND JOIN button (3) will connect you to the server without any changes to mods you have enabled on the MODS page. 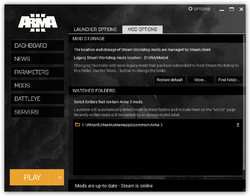 Launcher recognizes the following parameters (parameters are not case sensitive):

ⓘ
Missing redistributables should be automatically installed by Steam on Launcher's first start.

Launcher logs are stored in Users\yourUserName\AppData\Local\Arma 3 Launcher\Logs.
When something goes wrong (in several attempts, because Steam can have a bad moment sometimes :) ), please, create an issue on the Feedback Tracker (category Launcher) and include these logs.
You can also move the launcher logs packed into a zip file to the desktop, see Creating a Troubleshooting Report above.