Difference between revisions of "User:Marseille77"

Hi my name is Marseille77. I play the OFP Series since June 2001. Now I'm also gone into the addonmaker section. My first tries was retexturing models for myself for OFP and ArmA. For ArmA2 I made some Addons and release them to the Community.

Since autumn 2014 I lead the West German Army Addon for CWR2. In November I made the project for the old OFP/CWA Series - Bundeswehr 1985. 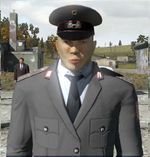