This page explains the steps required to create an addon (PBO file).

Place all required files (scripts, textures, fonts, models, etc.) in an empty folder, which hereafter will be referred to as the Addon folder.
It is recommended to organize the files into subfolders to avoid clutter.

In order to make this addon fully functional, at least two additional steps are required, which are explained in further detail in the subsequent sections:

In simple terms, Addon Prefix is a virtual (in-game) path to the root of an addon. This virtual path should be unique to prevent collision with other addons. The addon prefix is added to the PBO properties by the packing tool.

The addon prefix is typically a single word:

It is also possible to use a directory-like structure, which is typically used by mods that contain several addons:

Once the addon prefix is set, the path to addon files will be as follows:

For example, assume a file called car.p3d exists in the Addon Folder as follows:

In config.cpp, the model path should be:

⚠
The addon prefix can only contain English letters, numbers, underscore (_) and backslash (\). Note that spaces are not allowed!

There are several ways to set the addon prefix, depending on the packing tool used. The instructions for two commonly used tools, namely Addon Builder and Mikero's Tools are explained.

When the game loads an addon, it looks for a file called config.cpp to determine how to process the addon contents. Without such file, almost nothing will happen. In other words, config.cpp is the hub through which all of the addon contents (such as vehicles, weapons, sounds, functions, etc.) will be applied to the game.

This file should be created in the root of the Addon Folder. It is also possible to place additional config.cpp files in the subfolders of the addon, in which case the subfolders will be treated as separate addons by the game.

At the bare minimum, the config.cpp file requires a CfgPatches class. This will allow the game to determine what external addons are required by this addon, what objects/weapons are being added, as well as other information about the addon such as the author, version, etc.

All added/patched classes should be added to this file in order to be recognized and configured by the game.

ⓘ
Visit this page to know more about config classes.

All added/modified config classes, such as CfgVehicles (objects, backpacks), CfgWeapons (weapons, weapon attachments, uniforms, vests, etc.), CfgMagazines (magazines, grenades, mines, etc.), CfgAmmo (projectiles, detonators, etc.), CfgFunctions (registered scripts), CfgCloudlets (particles), etc. need to be added to this file.
If the class contents are too long, it is recommended to put them in external files (e.g. CfgFunctions.hpp) and #include them in the config.cpp file:

ⓘ
It is recommended to register your scripts as functions in the CfgFunctions class, especially if they are expected to be executed many times during the mission.

Scripts can be executed through appropriate classes in config.cpp. There are several ways to execute scripts, depending on the time and place where it is supposed to happen.


For example, scripts that are to be executed at mission init can be added to the CfgFunctions class with an init flag, such as preInit = 1.

Scripts that need to execute when a certain event takes place can be executed using appropriate Event Handlers, if applicable. This method is typically used by vehicle/weapon event handlers.

Some community modifications, such as Community Base Addons 3 (CBA), add more ways to execute scripts, such as executing a script every time a unit is created (object init event handlers)

Signing an addon allows it to be used in multiplayer servers that check for addon signatures. To sign an addon, a private key is required.

There are two types of keys: Private keys and Public keys.

A private key is a file in .biprivatekey format. It is used to sign addons.

⚠
The private keys, as the name suggests, should never be given to the public!

A public key is a file in .bikey format. It is used by the server to check the addon signatures.
These files are safe to give to the public (typically published with the mod itself; see Mod Folder Structure).

A signature is a file placed next to the PBO file, to verify its contents.
They are named as addon_name.pbo.key_name.bisign

To create a key, use the DSUtils program in Arma 3 Tools.

ⓘ
There is no need to create a new key with every version of an addon. That would require all servers using the addon to update the key after every update, which is inconvenient.
This article is a Stub. You can help BI Community Wiki by expanding it. 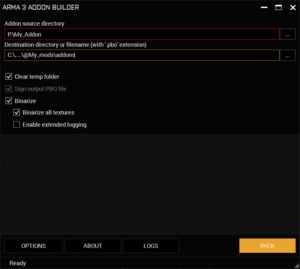 All files will be copied in their original folder structure with respect to the Addon Folder.

ⓘ
When the "Binarize" option is checked, all #included .hpp files in config.cpp will be added to config.bin file. Therefore there is no need to add *.hpp to the list of files to add (unless they're used elsewhere in the mod, such as scripts)

Other options can be left at their default values.

Finally, click on "Pack" to start the packing process.

This article is a Stub. You can help BI Community Wiki by expanding it.

hemtt is a build system for addons. It has the great advantage of handling multiple addons at once as well as being able to be used in CLI environments like GitHub Actions. The Arma 3 Tools have to be installed for it to binarize files. After installing hemtt you can get information about the usage with hemtt help. For a basic setup follow these steps:

In the command line enter the following command:

If you get an error that hemtt was not found make sure that the executable is in the project folder or the hemtt directory is part of your %PATH% variable. Fill out the prompts. Then create a folder called "addons". Inside of this folder create another folder called "main". Then create the following files:

The MAINPREFIX defaults to "z", the PREFIX is the one you entered during setup.

This will add CBA as a dependency.

Keep track of your mod's version in this file. Follows semantic versioning.

Now you should be able to run

The pbos are placed in the "addons" folder.

It is expected that the mod folder contents should be in a certain structure to be correctly recognized by the game, as well as when uploaded to the Steam Workshop.
The following tree list shows the general folder structure. Notice that some of these files/folders are optional, such as .bikey and .bisign files. It is possible to ship other contents in the mod folder as well, such as documentation and changelog files.