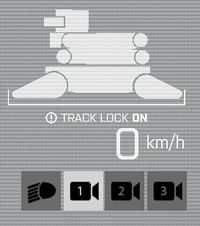 The track lock indicator (when the tracks are prevented from moving the vehicle) can be triggered with the following code. This concerns the UI indicator only, actual track locking is done by attaching the Mini UGV to e.g. a game logic in order to stop it.

The following animations can be used with the animateSource script command to control the exterior MFD statuses. Most of these animations are hidden by default. In order to unhide them, you have to animate them to 0 phase.

Example code to unhide all elements:

Note that the Probe is referred to as "Alien Network" in the game. Probe tips can be animated with the following function: