The initial idea for the whole simple object feature was to allow creation of simple p3d shapes, with no extra support and features what so ever. Such objects could be:

Because simple objects have close to no simulation, they have strong advantages and disadvantages. Those must be considered and understood to avoid the pitfalls and make most out of the feature.

No debate the most common use of simple objects is through EDEN. The implementation is very straightforward there:

⚠
Currently there is a bug with named objects and "simple object" property. In multiplayer, the object variable is only defined on the server, unlike with normal objects where it is defined everywhere.

Not all objects work well as simple objects - some objects require adjustment data (that need to be prepared properly by the content creator), some do not work at all (like units, game logics, weapon holders etc.). Because of that objects need to be whitelisted for the simple object feature to become available. The decision if object is suitable and well prepared for simple object feature is left on the object creator. Whitelisting is done by adding config parameter eden = 1; into SimpleObject class in object config definition. Objects without this parameter will not have the Simple Object option available in EDEN editor.

Table below shows aggregated results for each major simulation type in comparison to clean-scene framerate. There you can see % framerate drop that 400 of simulated, disabled, simple and super simple objects on scene cause. 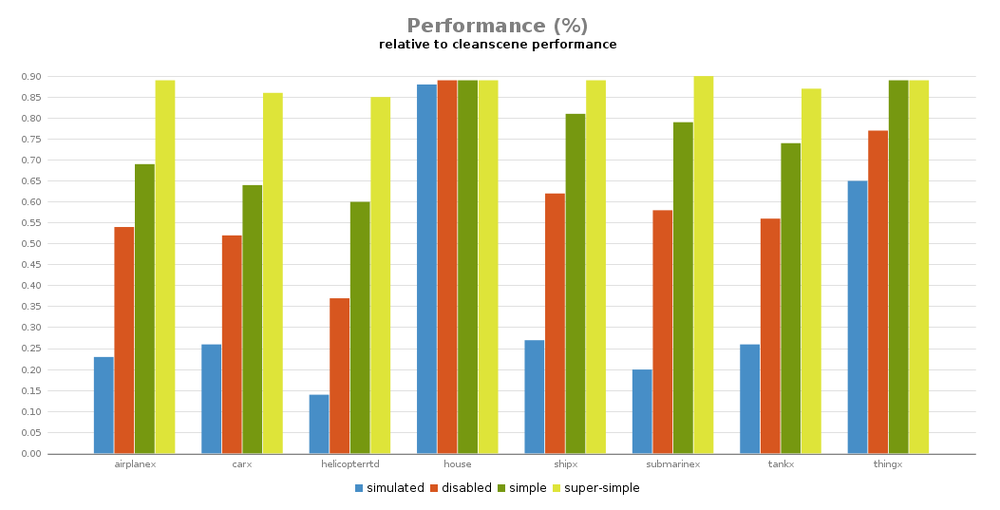 Over 3 thousands of official assets were sequentially tested. Each test composition was built of 400 instances of the tested asset on clean VR scene. To lower impact of LODing and rendering on benchmark results objects placed around player as close as possible but still outside of his FOV. Each asset was tested with full simulation, disabled simulation, simple object and super-simple object.

How to read the data? You can see that 400 of buildings (simulation house) will bring the scene framerate down to 88%. That's great. You can also notice that disabling simulation on the buildings or turning them into simple objects doesn't help at all. If you check situation of the rotor-lib helicopters (simulation helicopterrtd) you will see it is very different thing. Placing 400 of those helicopters will completely destroy your performance, bringing the scene framerate down to 14%. Even if you most likely won't use 400 of those babies in a mission the results show how much more performance hungry are these RTD helicopters over buildings and that just disabling their simulation will not help much, while turning them into Simple Objects or even Super-Simple Objects will help drastically.

House simulation works fine as it is. Disabling simulation or using simple objects there does not bring any measurable benefits.

In cases where users need to create simple objects during mission runtime or want to create their own scripts / systems / modules facilitating simple objects there are script commands and supplementing function framework available.

Because of the limited functionality of the simple objects some of the object related scripting commands do not work for Simple Objects, even more so for Super-Simple Objects.

There are 4 scripted functions that supplement and improve simple objects functionality and interaction.