A script file is multiple commands and arguments defining wanted behaviour from the game, all grouped together in a textfile. This code does a specific task handled by the game engine. The common extensions for Arma scripts are .sqf and .sqs, depending on the used syntax: SQF or (deprecated) SQS Syntax.

In Operation Flashpoint, scripts are limited to SQS Syntax.

The already existing (since Operation Flashpoint v1.85) SQF Syntax was introduced for scripts in Armed Assault. SQS Syntax is still usable but is considered deprecated since. 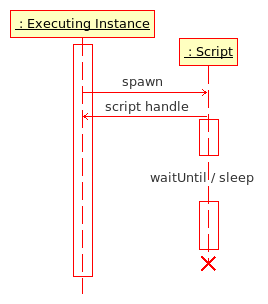 Scripts can be executed from several points in the game:

The commands to execute scripts are:

exec
exec starts a thread for a script in SQS Syntax.

execVM
execVM preprocesses and compiles a SQF Syntax script file and starts a thread for it.

call
call adds provided Code to the stack and wait for it to execute, then returns the code's last returned value.