The Ambient Combat Manager (ACM) is a scripted module for Arma 2 which can dynamically generate a war around a unit. It is meant to fill the gameworld with actual combat while moving through it and without having to place units manually. The generated patrols are not faked: they will fight with and / or against you.

Since no current computer would be able to handle an entire Arma 2 gameworld full of AI units, the ACM cleans up after itself. It will remove dynamic content as the player moves away from it. After starting a mission with an ACM it may take some time for the patrols to appear, depending mostly on the ACM's intensity setting. 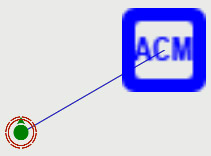 You can manipulate several ACM settings by calling pre-defined functions. The ACM needs a little time to initialize, so before calling these functions, please wait for initialization to complete. This can be achieved by looking at a variable stored inside the ACM itself: initDone. Assuming you named your ACM myFirstACM:

Here is a basic example of what you would put into your init file for your mission if you were to want specific units to spawn from your ACM. Assuming you named your ACM "BIS_ACM1", if you wanted a second ACM, copy and paste the below code beneath it renaming all the "1"s to 2s, with your second ACM named BIS_ACM2.

You can also spawn an ACM by script via createUnit. You will then have to also script its synchronization to a unit via synchronizeObjectsAdd. This needs to be done within 0.5 seconds from the start of the mission, because after that synchronizations are processed and set in stone.

By default the ACM spawns groups from the CfgGroups config. This means that when add-ons add new groups here, these will be automatically used. The groups also define a rarity value which determines how frequently a certain type of group should be used. Regular infantry is spawned more often than a sniper team for example. You can override the default group types with specific group types.

The ACM uses two types of patrols: air and ground. The differences are small and both will spawn units which patrol the area. The air patrol is designed to fly over or near the synchronized group specifically, while ground patrols are using truly random routes.