This guide will describe how to design and implement a custom Firing Drill Challenge as available in the vanilla game.

⚠
At time of writing it is not possible to add new Firing Drills as independent (Workshop) scenarios; they need to be added as 'mods' with configuration. This will be possible in update 2.02 however. 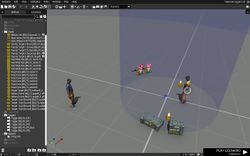 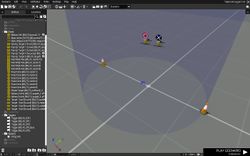 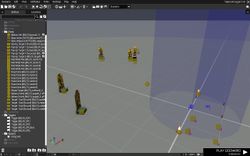 CP setup with some targets and a shooting box

The easiest approach for moving targets is to place the correct moving pop-up target variant (mind the direction variant too: sideways or forward) in the scene. These moving variants use the same target type profiles as regular pop-up targets. Then use 3D helper objects (that you hide later) as your visual waypoint references used in configuration (see below). Use logical naming conventions to easily match targets to waypoints, such as having the same name as the target with postfix _WP1.

You should also manually lay target rails. One way of doing that is to insert the first piece and manually setting its position / orientation value exactly as your moving target. Next, switch the entity move widget to object space, and slide the rails in only the directional axis you need. After a few pieces, copy and paste multiple to lay increasingly long segments (Ctrl + Shift + V to preserve the exact position). End your rails with the separate end piece in the same way. Unfortunately you cannot achieve perfectly aligned rails on sloped terrain, so keep that in mind or accept this.

Positionally randomized targets can be achieved in a similar way, by using 3D helper objects are your visual references. You can then use these named references in the configuration (below). Using the various trigger and chance properties allows you to achieve more randomization. However, consider how much randomization is desired. Too much randomization can defeat repeat training and muscle memory. Different drills may have different objectives in this regard.

⚠
This primary drill configuration is now only possible in a mod config, but from 2.02 can be used in a drill's own description.ext

⚠
The system-level configuration could be adjusted by a mod, but consider if that is not going to confuse players who may be trained on vanilla drills.

ⓘ
Some things are exposed and possible to change or use run-time, f.e. to make special unlocks or events happen.

⚠
While you can define any color you want for a drill, only several are fully supported. These colors are used for: object recoloring, HUD, frangible target hit VFX, map markers, etc. If you want to use another color, consider selecting the nearest matching colorName.

ⓘ
These are graffiti decals available in vanilla data. There are a few more, but those are highly specific.
ⓘ
All of these are available in the above colors. Replace the number in the texture path: 1 - red, 2 - orange, 3 - green, 4 - blue, 5 - purple, 6 - gray