The Audio Editor is the tool that defines how sounds behave in-game. It allows the creation of graphical signal chains that define the logic for how sounds are triggered based on in-game events, and how they respond to changes in various game parameters.

It allows listening to how sounds behave inside the editor with the built-in tools.

Projects created in the audio editor are saved as files with an .acp extension; outside of the editor, they can later be used to control the sound that in-game entities make by applying the file to the entity's respective SoundComponent inside the World Editor.

The Audio Editor shows the following interface on first launch:

Audio editor UI with the main sections outlined in red.

The audio editor UI is composed of the following panels:

ⓘ
Panels are able to be un-docked into a separate window and also hidden from view. To make a closed panel visible again, right-click on the background of the main window for a list of panels and their visibility status.

For a full description of the usage of each panel in the context of designing sounds, see the Getting Started Tutorial.

The Signal Editor is a sub-component of the Audio Editor - BIKI, where the user can edit the internal configurations of Signal nodes. Using the available node types in the signal editor, the user can define the input/output behavior of the Signal resource opened in the editor, transforming one or more inputs into one or more outputs.

The Signal Editor UI is identical to that of the parent Audio Editor, save for the types of nodes available in the Nodes palette. 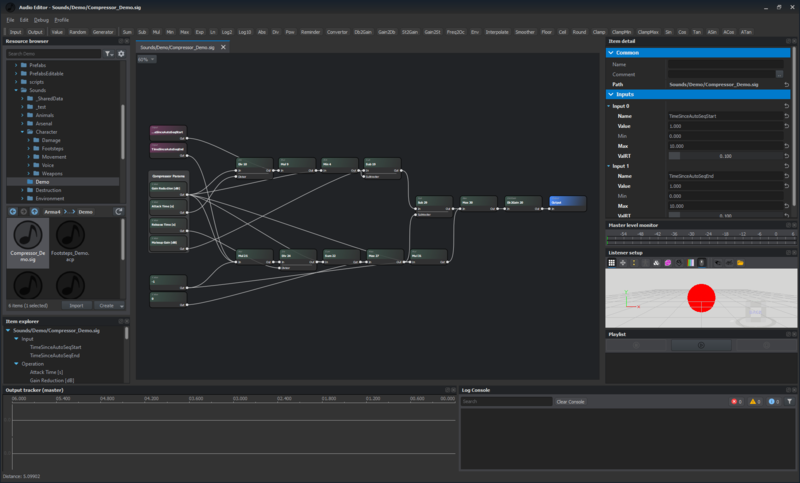