Before starting working on modified scripts, we need to prepare the basic structure for our new version of the scoring system. Therefore we will create:

In this tutorial, the scoring system will be used as an example of script modding and following things will be changed:

⚠
Scripting modding can only happen in Modules, defined in Arma Reforger's .gproj (Arma Reforger > Script Project Manager Settings > Modules): Scripts placed outside of those folders will be simply ignored! 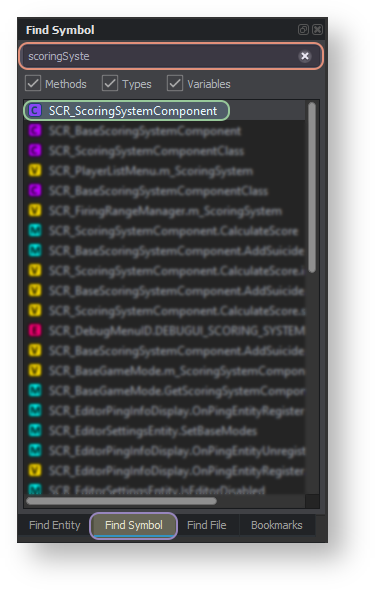 Before writing any code, let's start with investigating which files we need to modify and then, prepare structure for our modded files.

Since we want to modify the scoring system, we can begin by searching for terms related to it. By typing scoring into the Find Symbol search field, we should see SCR_ScoringSystemComponent.c on the first place. Double clicking

opens the file containing that class and reveals its location in the file structure. Next to it is SCR_BaseScoringSystemComponent.c and those two files should be enough to achieve the goals stated above.

Note that these two files are located in the Scripts/Game/GameMode/Scoring directory and contain most of the scoreboard-related functionality.

We will be interested in changing the behaviour of:

Once the directory is prepared, create two new script files inside the Modded folder. To do so, right-click on the Resource Browser field to open the context menu. From there, select "Script" to create a new script file. From here, it is time to create actual code!

It is usually a good habit to keep the original script and file structures; for the purpose of this tutorial, it assumed that following addon structure is used:

It is possible to modify already existing scripts by using some of special keyword:

We will use all these three words to create modded variants of SCR_ScoringSystemComponent.

ⓘ
For more elaborate information please refer to the Object Oriented Programming Basics, where more details can be found about how these keywords are working as well as simple examples.

First, we will begin with the modded keyword:

Next, we can proceed with replacing the CalculateScore method by using the override keyword:

As there is no intention to modify regular kill, team kills or objective score, lines containing:

This translates into what we want: for every death or suicide, ten points are obtained.

Original code - calculated score is only returned if its above 0, otherwise method returns 0. 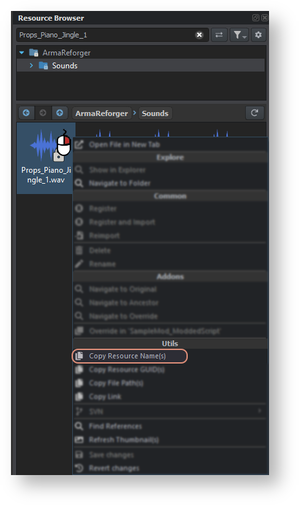 Same as with SCR_ScoringSystemComponent, we will use the modded keyword on SCR_BaseScoringSystemComponent to modify the content of that class. The AddSuicide method is called every time the player commits suicide and adds score according to previously defined modifiers. Since we don't want to change that part and instead want to add a new behaviour to it, we will use the super keyword to call the overridden method's code.

Once this is done, we can use the PlaySound method from the AudioSystem class - this takes one argument, ResourceName of a sound file - and plays a 2D, non spatial, sound.

A more mod-friendly way would be the following:

The code is now ready to compile (⇧ Shift + F7) and the result can be tested in-game.

ⓘ
Below prefabs are using Enfusion link which directly loads Workbench and points you to a proper resource. This functionality has to be manually enabled in Resource Manager options though! For more details see Resource Manager: Options page.

All those prefabs can be placed in World Editor's viewport by drag and dropping them from the Resource Browser.