Malden is the southernmost island of the group. It boasts a much smaller population (less than 500) than Everon or, of course, Nogova. The islands of Malden and Everon were both French Overseas Territorial Possession during the early 1800's and were captured by the Russian Imperial Navy after the Napoleonic Wars. It maintains a French influenced history even though it has been Russian Territory most of the 19th and 20th centuries. Throughout history, Malden was a stop off point for seafarers and Russian fishermen. In the 1960s Malden became a NATO outpost. Although the nearest major NATO base was in West Germany during 1985, Malden was considered not important enough and was left with only a minor presence. There is some farming on Malden although the topography and soil types are not conducive to good farming. Today most of the inhabitants are either descended from French Farm Settlers, Russian seafarers, Nogovan Refugees or are non active/active U.S. military personnel.

Malden is a dry, rocky island and the foliage is mostly comprised of short trees and shrubs. No tall pines can be found on Malden. This aside, Malden is still a most picturesque island worth of many sightseeing tours.

Malden, like Everon, has the same type of buildings and farms. Most buildings were constructed in french architecture of the early 1800' and provided upkeep during NATO occupation era. There are quite a few large villages located on Malden: in the north are La Trinite, Larche and Saint Louis, with the airport not far away; in the south there are La Riviere and Chapoi. The most central town is Arudy located in the mountain pass. The main port of the island is Le Port (meaning literally 'The Port'), lying at the south eastern point of Malden. 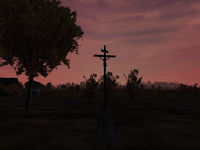 Off the eastern coast of Malden there is a small island (sometimes called the "Training Island") with several bases, firing range and obstacle course. Most of the coastline of the small training island is covered with anti-tank fences. The Training Island has the same outlines as Desert Island, although Desert Island has no objects, has a near-flat elevation and uses different ground textures.

The airfield on Malden is more protected than those on any other island. Secured by fences, gate and a base some distance from it. Other special objects on Malden are the lighthouses.

The terrain of Malden consists mostly of mountains, valley and a dangerous cliff. 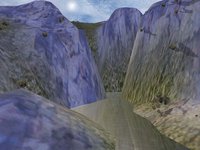 There is also a small desert to the north covered by some rocks. Also in the north west of the island there is a 'Stonehenge' like array of large rocks. No one knows how or when these stones were erected, and their formation is anything but natural.

Topography of Malden is based on the Greek island of Lefkada in the Ionian sea.