Everon is the easternmost island in the Malden group of islands, located approximately 100 Nautical Miles Northwest of the Heligoland Archipelago in the North Sea. The islands earliest recorded history indicates that both the island of Everon and its sister island Malden were Overseas Territorial Possessions of France during the Napoleonic Wars of the early 19th century. The towns and settlements on the island were constructed during this time period. At the end of the Napoleonic War, Everon was captured by the Prussian Empire and became a Small Naval Outpost. The few French settlers that remained on the island assimilated into the Prussian Empire and kept the traditional naming of the towns and locations. During World War II, The Nazi German Navy used it as a listening post for Allied Naval Ships and conducted search and destroy torpedo missions from the island. After the Nazi defeat, the island was abandoned to the small civilian population. During the Cold War, The Soviet Union sought out occupation of the island after the Nogovan conflict of 1982.

Everon is mostly covered in evergreens but also has a large number of different types of trees. There is a laid back, sedentary lifestyle on Everon, relying on agriculture and farming for self sustenance of the communities. There is no established government, due mostly to the low population of the island.

There are a few large villages on Everon. The French influenced names are the original names given to the towns by the first settlers of the island group. The most central of these is Montignac. Lamentin is a large town and is located far west, and is known for it is breathtaking sunsets. Finally there is Saint Pierre in the valley to the south. The rest of the villages are fairly small.

The most central village, Montignac.

The buildings reflect the typical French influenced farming communes of rural France. The island has one large castle ruin which is used by the Everon Resistance Group as HQ in the Cold War Crisis campaign. It's located above Saint Pierre on top of the mountain to the south. 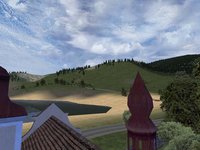 The Castle ruin as seen from Saint Pierre.

The ruin consists of a gate, tower, one destroyed tower and some other remains of walls scattered around. The castle makes an ideal defensive position because the mountain it is situated on is very steep, making attacking with tanks infeasible and lending the defenders a considerable advantage. 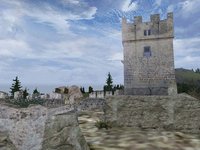 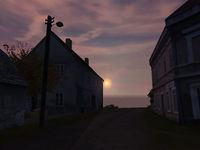 Lamentin is known for it is beautiful sunsets. 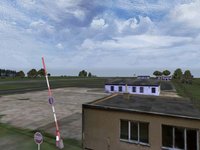 Everon is mostly an evergreen island but has a range of different trees as well, including Oaks, Birches, Chestnuts, and Beeches. All dense forests are made up of pines. In the mountains there are only spruces and some rocks. The terrain is rather flat to quite hilly in most parts of Everon. The south-eastern part however is more mountainous and has a valley.

Following the defeat of the invading Soviet forces on Nogova in 1982, some members of the resistance army travelled to Everon to put in place safeguards should a similar fate befall that island. Weapons, training and other resources were left in the hands of a very select few on Everon, including the future resistance leader. The reasons for this migration of ideas can only be theorised, although many from Nogova have familial, genealogical ties with those on Everon. This is why the FIA symbol was seen used by the Everon Freedom Alliance during the occupation of Everon in 1985.

Everon's landscape is based on the Croatian island of Krk.