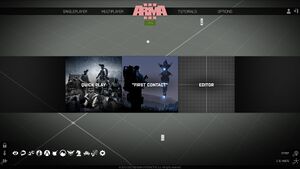 The first level of Invaders

Invaders is a minigame in the Arma 3 main menu. It is only available during Arma 3 Steam sales.

The Invaders minigame can be opted out of (or back in) by executing the following code (for example with the Debug Console in the Eden Editor):

In case Invaders is not live, you can still force a live toggle bypass to start it if you really want by executing this code: