From Bohemia Interactive Community
Jump to navigation Jump to search
This article is a Stub. You can help BI Community Wiki by expanding it.

Altis also has its (nicer) Stonehenge with a decorative skull on the top, located in the North-East corner of 144061 at Cape Makrinos.

TRPASLIK is written with rocks on the bottom of the sea at 229061 (source) Trpaslik is Altis' Environment Designer (REPORT IN).

«
« According to legend, there is a hidden cave somewhere on the coast of Stratis, rumored to contain treasures hidden by the Arabian pirates. » – Arma 3 loading screen

The mentioned Pirate Cave is located at 042073 (how-to video)

Same as in Operation Flashpoint, Malden 2035 has its own Stonehenge, located in the North-West corner of 058101 coordinates. 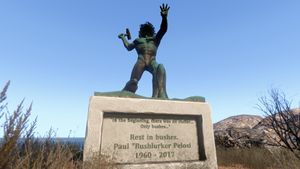 At 027074 lays a monument in tribute to Paul “Bushlurker” Pelosi (1960-2017) who has worked on many community terrains, including Malden for CWR2. He passed away some months before Malden 2035's release.

The statue itself was made by Kiory and announced on the forums, and was later implemented officially.