The Splendid Camera is available in Eden Editor and Debug Console. It can be used to capture scenes, look around the map or create splendid screenshots. 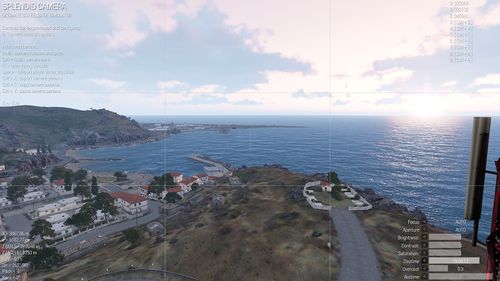 It is also possible to shot a screen via Steam (default F12). See Steamworks Documentation for more information.

Positions, including camera parameters can be stored by pressing Ctrl + 0..9. One a position was stored it can be loaded by pressing the number key of the slot is was saved in.


Calling BIS_fnc_camera with the exported array will automcatically open the camera and move to the given position with given parameters.

The camera comes also with the possibility to change the appearance of the current scene by allowing the player to change various parameters.

Changes the distance between the virtual lens and the sharp area of the photo. Default AUTO

Defines how much light enters the virtual lens. A higher value means less light, but a photo which is sharp even in the corners. A low value means it’s only sharp in the center and gradually becomes unsharp.

Changes the brightness of the photo.

Changes the contrast of the photo.

Defines how vivid the photo will be. Zero means black/white.

Defines how cloudy the scene will be.

Defines the simulation time of the scene. Zero means no movement

THIS IS WAR PHOTOGRAPHY by Karel Moricky