Welcome behind the Iron Curtain! Take a look at what life behind the barbed wire could have been in an alternate universe of the 1980s in Czechoslovakia and its border with West Germany. Ride, fly, or run into battle against your enemy in an all-new lush and mountainous terrain. Conduct large-scale mechanized infantry operations, Special Forces raids and long-range reconnaissance patrols deep behind enemy lines. Choose to be a member of US Armed Forces, Czechoslovak People's Army, Independent Rebels, or even play as a civilian. It's all up to you!

Arma 3 Creator DLC is optional to install and load. To play Arma 3 with this DLC enabled, please visit the DLC section in the Arma 3 Launcher, make sure "CSLA Iron Curtain" is owned and loaded, and then launch the game by clicking on the PLAY button.

This map depicts the southwestern border area of 1980s Czechoslovakia and West Germany. The vast border area divides the map into two different worlds. This contribution of Czechoslovakia to the Iron Curtain stretches through a diverse terrain of rivers, valleys, and mountains. Meeting your enemy on the field of battle will make you fight for both urban and country areas while operating from field camps, military bases and airfields. If you get tired of fighting your enemies, you can just wander into the woods along tourist trails and visit various landmarks including a large castle, a dam, caverns, mines and other interesting places.

While not part of the main release, standalone (cDLC still required) campaign which revolves around FIA rebels fighting Czechoslovak Comunist Party has been relased by CSLA Studio on Steam Workshop. For more information see here.

Use the full potential of both armies' inventory. Battle Czechoslovak armored columns in your trusty Abrams tank. Lead a team of Special Forces on a combat patrol in enemy territory. Get together with a group of fellow players and liberate vast territories from the hands of other human players or AI forces. Alternatively, get back to the roots and visit a military equipment showcase at a local airbase to test all vehicles and weapons in a military training area.

Take advantage of 40 unique vehicles in over 68 variants in total. Almost every vehicle sports a variety of stowage and other customizable parts including camouflage.

Battle your enemies using 41 new weapons, including multiple variants and a large variety of attachments such as bipods, suppressors, flashlights, bayonets, regular and NV scopes.

Fancy dressing in M81 woodland camo or perhaps M60 Raindrop pattern? No? Then probably a mixture of both complemented with Salamander and Oaks camo smocks worn by the rebels? Of course, we have an assortment of civilian clothes and you might even find a police uniform or two.

Soldiers have to carry a lot equipment in various weather conditions. For that, you get to choose from an assortment of vests, harnesses, backpacks, caps, helmets and other gear. Be sure to check them all in the Virtual Arsenal or in the editor.

People who do not own the CSLA Iron Curtain DLC are able to download and install the DLC's optional data via the Arma 3 Steam Workshop: 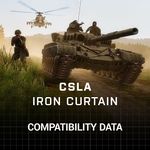 Subscribing to this Workshop item makes it possible for potential buyers to try out CSLA Iron Curtain DLC assets (such as weapons and vehicles) prior to purchasing. It also enables non-owners to join multiplayer servers that make use of CSLA content. Be aware that access to the DLC's Gabreta terrain remains exclusive to owners of the DLC, plus restrictions to the use of non-owned content apply.

A campaign which revolves around FIA rebels fighting Czechoslovak Comunist Party has been relased by CSLA Studio. For more information see here. 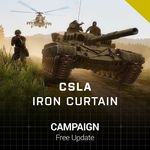 An expansion pack not depending on official Bohemia CDLC Update release pipeline. Curently, it contains a number of single and multi player missions and a map named Polanek created by CSLA Studio post release of the CDLC. 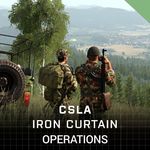 A pack of desert camouflage textures for vehicles created by CSLA Studio prior an update of the CDLC. 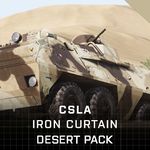 The Arma 3 Creator DLC: CSLA Iron Curtain was created by CSLA Studio. Originally founded in early 2001, the CSLA Studio team focused on the history of the Cold War era in Czechoslovakia since the first Arma game, Arma: Cold War Assault, was released. Putting thousands of hours into making community modifications, the team earned the respect of the Arma community. Expanding and utilizing their experience, the team is now taking their work to the next level with their CSLA Iron Curtain Creator DLC. For more information about the history of CSLA Team and it's mods see here: Czechoslovak Peoples Army

To gain more information about all the aspects of the CDLC including asset class names, mission lists etc, pick one of the following categories.