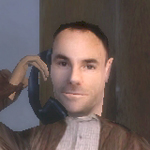 After the loss of his friend Victor Troska, Gastovski retired from military service, opening a small civilian airline company on Malden called 'Pegasus Air Taxis'. However, three years after the incident on Nogova he was contacted by Colonel Blake after the discovery of foreign troops on Everon, and was persuaded to join the conflict. He undertook sabotage missions behind enemy lines, and was directly responsible for capturing General Guba at the end of the Cold War Crisis storyline. 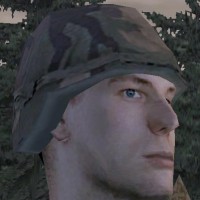 A young private in the U.S. Army. At the beginning of the story, Armstrong, along with his friends Fowley, Kozlowski, and Bormioli, are in training on Malden, under Sgt. Berghoff's command. Armstrong takes part in the initial invasion of Everon and is soon promoted to Corporal. Armstrong was among the many soldiers stranded on Everon after the evacuation, and was captured and briefly detained by the renegade Soviet forces before being rescued by a group of resistance fighters lead by Commander Slava. Armstrong befriends Slava and assists the guerillas in their fight against the occupying Soviets in return for their assistance in contacting NATO command.

Back on Malden, Armstrong soon finds himself in the middle of the Soviet invasion of that island. Having distinguished himself in combat during the operations on Malden, Armstrong is promoted to Lieutenant by Colonel Blake, is given command of his own unit, and is introduced to Major James Gastovski. Together, Armstrong and Gastovski return to Everon seeking the resistance's help in defeating General Guba's forces on Everon. The guerillas are reluctant to trust the Americans, angry at having been abandoned to fight off the Soviets alone before, but they eventually agree to provide useful intelligence.

Armstrong plays key roles in the subsequent invasions of Everon and, later, Kolgujev, successfully leading the initial infantry assaults in both of those operations.

A rookie tank commander with little experience. He is called into action during the renegade Soviet invasion of Malden, and commands an M60 Patton as part of a tank platoon. He takes part in several battles against the Soviets on Malden, and is soon given command of an M1 Abrams tank. Later, he is promoted and given command of his own tank platoon, and leads it in various operations on Everon.

A pilot who takes part in the second invasion of Everon. Initially, he flies a UH-60 Blackhawk, but he is soon assigned to fly an AH-1 Cobra gunship. After the liberation of Everon, Captain Nichols is called upon to pilot an A-10 Thunderbolt II. During a search & destroy mission over southern Kolgujev in support of the imminent invasion, Nichols' A-10 is shot down and he is captured by General Guba's forces and is displayed in a video taped message which Guba sends to Colonel Blake, warning Blake if he doesn't leave the islands that Nichols will be executed. Deciding that they have no choice but to ignore the ultimatum, Colonel Blake orders that the invasion must continue. Shortly before his scheduled execution, Nichols escapes from prison and makes his way back to friendly territory.

He is the commanding officer of the U.S. forces in the Malden island chain and at the beginning of the game he contacts Major James Gastovski and enlists his help. Then he is seen at the base on Malden with Sgt Berghoff's unit and filling them in on the details of the mission. As the story progresses he is so impressed with Corporal David Armstrong's performance that he promotes him to Lieutenant and has him and Gastovski go to Everon to enlist the help of the resistance. 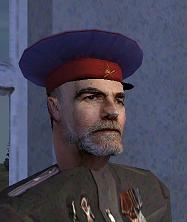 The little background information there is on Guba reveals that he spent five years as a Commandant in one of Stalin’s Siberian gulags, where he earned the nickname 'The Dentist'. The origin of this nickname is still unknown.
Under Brezhnev he moved to the KGB and we lost track of him. Rumor has it he was running a special interrogation unit in Moscow.


Three years later after his defeat on Nogova, in the uncertainty that spread after Mikhail Gorbachev came to power in the Soviet Union in 1985, Guba took it upon himself to promote the 'old ideals' which he still firmly held to. With the well-equipped Third Army at his command he struck out from his base on Kolgujev and invaded Everon. The NATO forces based on nearby Malden were taken by surprise but, under the leadership of Colonel Blake eventually triumphed, and Major James Gastovski captured Guba as he tried to escape.

Note: official BI documentation gives Guba's name as General Ivan Vasilii Guba in CWC, but within the game his name is given as Colonel Aleksei Vasilii Guba.

Major Angelina Malevich is General Guba's secretary. She is first introduced in Dimitri Lukin's storyline as she arrives on Everon by boat. Lukin escorts her safely to her chopper after dealing with resistance fighters. She is also seen talking to Captain Sam Nichols after he was shot down over Kolgujev. After Major James Gastovski destroys one of Guba's Scuds Guba is not happy with Angelina's failure and she is shot and killed by Guba with his pistol.

He is a Spetsnaz who was demoted to a grunt after a incident in Afghanistan. He works his way back up to Spetsnaz after completing missions like protecting Secretary Angelina to rescuing a tank crew left behind on Malden after the Americans defeated them. For his actions General Guba promotes him back to Spetsnaz and later on while trying to kill a resistance leader on Everon it turns out to be a old friend of his. He tells that Guba has betrayed the Soviet Union and is trying to take over the Malden islands. Lukin joins the resistance to help defeat Guba and end the war and afterwards heads back to Russia. Then a year later he is in charge of own his on Spetsnaz unit.

He is the resistance commander that rescues David Armstrong just when he was about to be captured by the Russians after they captured Everon. He helps David escape the island after he agreed to help him with a rescue mission. Later when David returns to Everon with Major James Gastovski the resistance leader mentions to him that he was killed in action. He also tells David before his death that Slava made documents for him to take Colonel Blake in regards to info about the Russians on Everon.