Particle is a lightweight for performance effect system that is to be used for emulate dusts, fires, explosions, and/or anything. Every explosions, dusts, fires and most of in-game 3D effects are made in this system.
Particles can be generated by script commands like drop, so you can also do emulate them easily. 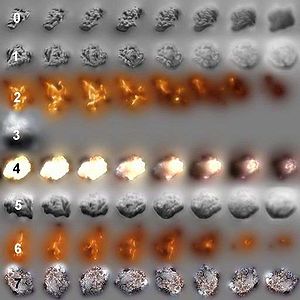 ShapeName - Name of the shape associated with the particle.

In ArmA, the ShapeName is defined as an array. This should be the particle shape name, followed by three integers.
Example: ["\Ca\Data\ParticleEffects\FireAndSmokeAnim\SmokeAnim.p3d", 8, 5, 0]

In this shot of "\Ca\Data\ParticleEffects\FireAndSmokeAnim\SmokeAnim.p3d", note the following:

The image used for this particle effect is 8X8 effect frames. This means you need to use 8 as your Anim Divisor. Overwise, the game will either draw too much of the image used, or too little. This is highly visible in most situations.

The setting for the Number of Number of Frames to Play should, in most cases, be the number of effects available to the animation. If you go over this (for example, selecting 9 in this 8X8 tile), it will start playing the animation frames of the next effect down. If there is nothing below to grab, it will draw a blank for that frame. If 1 is used, it will only play the first frame of the selected row.
If you want to find out of how many rows a datasource consists use ["...", 1, 0, 1] to see the full picture as a particle. 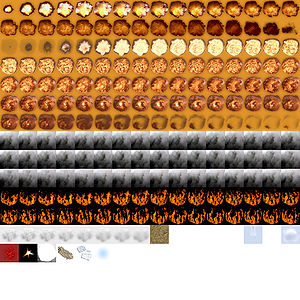 In Arma 2 (and OA), the method for determining how many frames to play has changed.

Example 1 above (a fire burning) will start the animation in row 10, will play from frames 1 to 32, and will loop.

Also in Arma 2 and OA, To achieve a single frame of animation that is not the first column of a row, use the third numerical value as a column selection instead of indicating how many frames to play.

["\Ca\Data\ParticleEffects\Universal\Universal", 16, 12, 9, 0]
Additional Step: You must also set the AnimationPhase value (described in render parameters) to a large number (such as 1000) if you only want to play a single frame. The reason for this is that the game engine does not only play a single frame, it actually begins at the first frame in the row and cycles to the desired frame. If a small AnimationPhase number is used then you can actualy see the animation cycle through the all the frames (1-9). A large number makes this imperceptible and only the desired frame appears to be displayed. 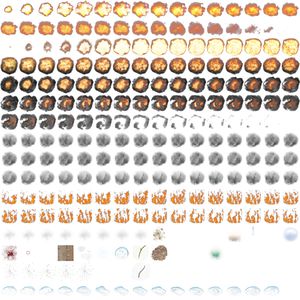 Example 2 above (exploding rock dust) will start the animation in row 12, will only play frame 9, and will not loop.

AnimationName - Has to be a String, but it is obsolete. Used to play .rtm anims, if not empty, it will throw "Skeletal animation not supported for particles" rpt error

Type - Type of particle (either "Billboard" or "SpaceObject").

TimerPeriod - The period of calling the "OnTimer" event (in sec).

LifeTime - Life time of the particle (in sec).

Position' - Either 3D coordinate (x, y, z) or name of the selection - in this case the Object property must be set.

MoveVelocity - 3D vector (x, y, z) which describes the velocity vector of the particle direction and speed in m/s.

RotationVelocity - Float number which determines number of rotations in one second.

Weight - Weight of the particle (kg).

Volume - Volume of the particle (m3).

Rubbing - Float number without dimension which determines the impact of the density of the environment on this particle. 0 - no impact (vacuum).

Angle - Float number which determines starting angle of the particle.

OnSurface - Boolean. Placing of particle on (water) surface on start of it is existence, default value is true, works only if circleRadius > 0. Circle radius is defined by command setParticleCircle. Works since Arma 3 v. 0.74.

BounceOnSurface - Coef of speed's loosing in collision with ground, 0-1 for collisions, -1 disable collision. Default value -1. Should be used soberly, it has significant impact on performance. Works since Arma 3 v. 0.74. 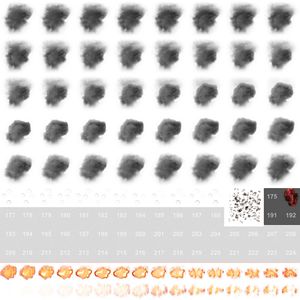 ⓘ
All these values are set as arrays to show their development in time.

The rest of the values during the life time will be linearly interpolated.

Size - Size of the particle in time to render (m).

Color - Colour of the particle in time to render (RGBA).

EmissiveColor - Sets emissivity of the particle (RGB0). Works as lighting of particles, so must be combined with correctly set particle color. Last parameter has no meaning for now.

RandomDirectionPeriod - Period of change of the velocity vector (s).

OnTimer - Name of the script to run every period determined by TimerPeriod property.

BeforeDestroy - Name of the script to run right before destroying the particle.

Object - Object to bind this particle to.

For several examples of the kind of effects that can be accomplished via particles, see ParticleTemplates.