Client scripting is new way how to optimize multiplayer games created in Ylands editor. It allows to offload some of the scripting from server and execute it only on the client meaning that these scripts are not subjected to player multiplayer latency (i.e ping). However this advantage is coming with few disadvantages.

Because the local scripting is not authorized by server, it does not allow to do all the stuff possible with "normal" (server) scripting. Everything done trough Client Scripting stays only on the client, so there are several limitations imposed by this fact.

On the other hand Client Script allows to do many things that are not needed to be authorized by server, because they only matter to the client (player) or stuff which would not be effective in Server script due the latency. It is mostly useful for improving player UI experience.

In order to assure the communication between server and client scripting, there are events that allow to send/listen to messages between those two. For example you can send a final score of 2D UI game to the server to be included in the leaderboard. 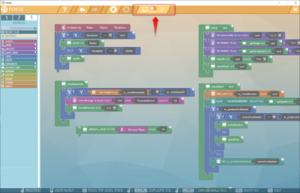 If client scripting is supported by the Game Logic, it can be toggled by switching the canvas by using the to toggle found in the top bar.

Clients / Server scripts run simultaneously, one does not disable the other.

Client Script variables can be exposed as Custom Parameters in same way as Server ones and they will appear along them in Object Properties.

Special events can provide to provide data from Client to the Server (and vice versa).